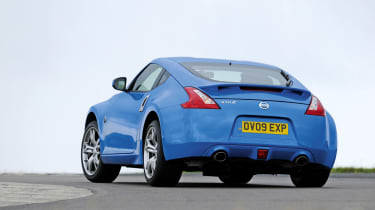 On paper, the Nissan 370Z has all the right ingredients for sports car greatness: a 326bhp V6 engine, sharp rear-wheel-drive chassis and jaw-dropping styling. Using the same template as the successful 350Z it replaces, the newcomer ditches sophistication and refinement in the pursuit of driving thrills. It’s a hairy-chested machine that can easily trace its roots back to the legendary 1969 240Z, especially in terms of looks.

There’s a long bonnet that features a large power bulge, a squat rear end, short overhangs and shallow side windows. It’s a little brutish compared to the TTS, but there’s no doubt the Nissan has plenty of presence.

Inside, the layout and design of the cabin are similar to the 350Z. There’s a high transmission tunnel, the main instruments are stacked in a pod in front of the driver, while the cowled auxiliary dials sit on top of the dash. Equipment in our GT Pack test car is generous, with standard leather trim, electric heated seats, dual-zone climate control, CD changer and keyless start.

However, there are flaws. Some of the plastics look and feel cheap, the three-spoke steering wheel is adjustable for rake only and rear visibility is poor, as a result of the small rear quarter-light windows. There’s also limited luggage space, with the shallow boot able to swallow only 235 litres, which is 55 litres less than the Audi.

Even more disappointing is the Nissan’s display at the test track. It’s dominant from 0-60mph – taking only 5.7 seconds – but can’t match the scorching in-gear pace of the TTS. Worse still, the 370Z’s 3.7-litre V6 sounds harsh and strained when extended, while its six-speed manual gearbox suffers from a clunky, cumbersome shift action.

Point the car’s long nose into a corner, and you’ll find the heavy steering has decent feedback, while on smooth surfaces there’s plenty of grip and very little body roll. But on bumpy back lanes the Nissan’s composure soon crumbles, as the stiff suspension struggles to keep the Z’s hefty 1,496kg kerbweight under control.

Experienced drivers will relish the muscle car chassis dynamics of the Nissan, yet it doesn’t inspire the same unshakable confidence as the all-wheel-drive Audi.

The 370Z also lacks long-distance cruising credentials, because its heavy controls and high levels of road noise leave you feeling tired after a stint on the motorway.

It’s not all bad news for the Nissan, though. There’s no denying it has bags of character, and it’s good value too – at £30,200, it’s £3,225 cheaper than the TT. For many buyers, the car’s eye-catching styling, price and old-school charms will be enough to look past its shortcomings. But has it done enough to topple our coupé champ?

WHY: As with all Z-cars, the 370Z combines muscular performance, raw driving thrills and great value.