Nissan’s latest Z-car blends stunning looks with a powerful engine. Does it blow away our favourite sporting all-rounder, the Audi TTS? 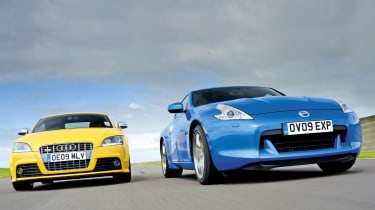 When it comes to building classy coupés, few firms can match Nissan’s know-how. The Japanese company began its sporting legacy in 1969 with the legendary Datsun 240Z, which mixed head-turning looks, muscular performance and raw driving thrills. Forty years on, it’s following the same formula with the all-new 370Z.

Lighter, more compact and faster than its predecessor, the 350Z, the newcomer is set to deliver even greater straight-line pace and involving driving dynamics. However, it hasn’t abandoned the Z-car’s reputation for value in the class.

Prices start at £26,900, while our extremely well equipped GT Pack model will set you back £30,200. For the money you get a punchy 326bhp-litre V6 engine, traditional rear-wheel-drive chassis and arresting style.

However, the Nissan faces some stiff competition if it wants to become class champ. The rakish Audi TT is the benchmark here, having just been crowned Best Coupé in our annual New Car Awards for the third year in a row. With its graceful lines, beautifully crafted build quality and surprisingly practical cabin, the model has won legions of fans since the introduction of the second- generation model in 2006.

In racy TTS trim, the stylish German takes a different approach to its Japanese rival. With a small-capacity turbo four-cylinder engine and four-wheel-drive transmission, the Audi is the hi-tech choice.

So, which model will win this battle of brains versus brawn?

This test highlights what different characters these cars have. The Nissan assaults its owner with a brash and brutish personality, while the Audi is a smooth and sophisticated performer. But which approach makes for a better coupé?

The 370Z appeals to the heart over the head, and is let down by its stiff suspension, coarse engine, poor practicality and heavy controls. While it’s fun in the right conditions, it’s a blunt instrument – and a step back from the 350Z.

By comparison, the classy and composed TTS feels incredibly precise. The superb turbo engine and quattro transmission mean it’s faster and inspires more confidence than the Nissan. And what it lacks in driver involvement it makes up for with its beautiful finish and reasonably versatile cabin, while lower running costs will offset its higher price. As a stylish all-rounder, the Audi continues to set the benchmark.

1st: Audi TTS Although the TTS isn’t as raw as the racy new 370Z, as a daily driver it’s a much more appealing proposition. Fast, stylish, practical and with a rock-solid image, the Audi still leads the way in the coupé sector.

2nd: Nissan 370Z The Nissan can be entertaining and exciting, but most of the time its gruff, unsophisticated personality becomes tiring. There’s no denying it represents excellent value for money, yet this isn’t enough to claim victory here.