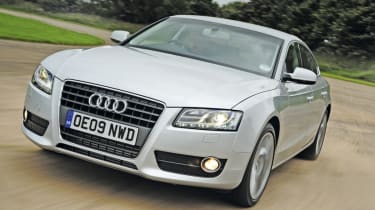 Bosses at Audi say the A5 Sportback is the modern embodiment of the grand tourer – a car that merges coupé style with saloon practicality and delivers superb comfort over long distances.

That sounds like marketing puff, but you can see the firm’s point. The newcomer is longer, lower and wider than the A4 saloon, and the roofline is only 19mm higher than that of the A5 coupé. The Sportback’s front end is also virtually identical to the two-door model’s.

In profile, the sharply creased shoulder line and curved roof highlight the car’s practical hatchback body. As the wheelbase is 59mm longer than the coupé’s, rear passenger room is generous, while the boot capacity is identical to the A4 saloon’s, at 480 litres. That means the Audi trails the VW by 52 litres – but fold the seats and load up to the window line, and the Sportback regains the advantage with a 980-litre area that’s on par with the A4 Avant.The hatch opening adds to the appeal, and makes the Audi far more flexible here.

Inside, the Sportback’s cabin is identical to the two-door A5, so you get a neatly laid out and beautifully trimmed dash. SE spec brings a multifunction steering wheel and leather seats as standard, while the driving position is also spot-on. And although the view from behind the wheel isn’t very coupé-like, the frameless windows hint at the car’s sportiness.

As with the interior, the driving experience is largely unchanged from the regular A5. Even our front-wheel-drive version provides good traction, and the steering offers positive turn-in. Grip is impressive and high-speed stability excellent. Much like the other models in the family, the handling is accomplished and inspires plenty of confidence.

The Audi Drive Select system provides electronic adjustment of damper and steering settings, but it doesn’t come as standard on this SE model. Yet while the Sportback could be more fun from behind the wheel, when driven back-to-back with the Passat, the tauter body, weightier steering and sharper responses still make it more enjoyable than the VW.

Unfortunately, the price you pay for this is a harder ride – the Sportback thumps over road joints that the VW, with its active dampers, irons out easily. At motorway speeds, the Audi’s solid set-up means there’s a fraction more tyre and road noise, too.

However, the larger optional 18-inch wheels on our test car exaggerate this; it should be less obvious on the standard 17-inch rims. And as the two cars share the same common-rail 2.0 TDI diesel engine, we weren’t surprised to find that they were difficult to separate for overall refinement.

At the test track, they served up similar performance, too. The A5 Sportback was two-tenths slower in the sprint from 0-60mph, recording a time of 8.6 seconds. It was also a fraction slower during our in-gear assessments, although this is largely down to the fact that it weighs 39kg more, at 1,530kg, and doesn’t benefit from the shorter ratios of the DSG dual-clutch transmission in the Passat. The six-speed manual box in the Sportback is very smooth, though, and the Start/Stop system helps it emit much less CO2.

If you prefer an automatic, Audi will offer its dual-clutch S tronic gearbox as an option on the 2.0-litre TDI later in the year. But buyers will have to do without the Start/Stop set-up.

Our manual £27,140 Sportback 2.0 TDI SE costs a considerable £2,140 more than the VW here, and carries a £1,755 premium over a similar A4. It’s stylish, practical and classy, and a worthy addition to the range. But do its low emissions and great resale values help to offset the outlay?

Chart position: 1WHY: Blending the visual appeal of a coupé with hatch flexibility, the Sportback is the final piece in the A5 jigsaw.