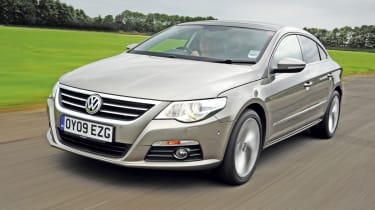 The Volkswagen Passat has marched further upmarket than any of its mainstream rivals, but it’s a sensible car rather than a sexy one.

So the firm’s designers faced a tough job to create a stylish version that would sell on its design. But to our eyes they have pulled it off. The sleek CC looks even better in the metal than it does in our pictures, and really turns heads.

In GT trim, with its lower sports suspension, the standard 18-inch alloys fill the arches, while tinted glass, LED tail-lights and chrome grille inserts add to its classy appearance. Because of the similarities between all the variants of A4 and A5, the Passat is the more distinctive car of our duo.

The tape measure shows the VW sits higher than the Audi and despite being longer overall, its wheelbase is 102mm shorter. This doesn’t affect rear legroom, though, and the VW provides more space in the footwells than its rival. Apart from the sweeping roofline, which impacts on headroom, rear comfort is hard to fault.

Both cars are strictly four-seaters, but the Passat CC features a load-through ski hatch as standard. And despite the conventional saloon-style boot, its 60/40 split rear seats fold flat. This gives you a long load area, but the restricted height under the rear screen means it isn’t as flexible as the A5 hatch.

Leave the seats in place and the Audi’s advantage is less clearcut, as the VW’s 532-litre boot capacity is 47 litres greater than the regular Passat offers, while the A5 only provides 480 litres of load space.

Up front, the facia and much of the switchgear are shared with the standard car. While it lacks a bit of flair, the fit and finish are exemplary and it matches the A5 for quality.The ribbed leather upholstery on our test car is a £1,445 option, while electric adjustment for the driver’s seat costs £595. Even without these luxuries, though, the basics are right – the driving position is excellent and dash layout logical.

The sensation from behind the wheel is one of relaxation. Noise from the engine is well suppressed and GT trim includes Adaptive Chassis Control (ACC) as standard. This gives a choice of Sport, Comfort and Normal modes for the suspension.

The Comfort setting is all you need as it gives the CC a composed and smooth ride, which plays to its strengths as a relaxing long-distance cruiser. In the corners there’s a fraction more roll and the VW’s chassis isn’t as taut as the Audi’s, while the steering’s lack of feedback is disappointing.

A six-speed manual model is available, but the dual-clutch DSG’s smooth shifts are well suited to the CC and helped the VW to be fractionally quicker in our performance tests. With its lower price and sharp-suited looks, the Passat is a genuine contender.

Chart position: 2WHY: VW’s four-door coupé adds a dose of style and gets a twin-clutch gearbox for less than the manual Audi.