Saloon scores on value, but is that enough for it to win here? 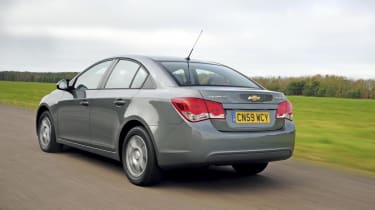 The Chevrolet brand is going from strength to strength. Having risen from the ashes of Daewoo, it got off to a difficult start in Europe. But since 2005, General Motors has slowly established Chevrolet as a genuine contender in the value car market – and the Cruze is its best product yet.

It’s styled to appeal to a worldwide audience, and isn’t very adventurous. But with a prominent shoulder line and swept-back headlamps, the overall shape is clean and handsome. It does have one drawback, though. The UK’s love of hatchbacks doesn’t extend to the Cruze’s key Asian markets, so it’s produced only as a four-door saloon.

Inside, the cabin is a big step forward from previous Chevrolets. The attractive facia features smart blue illumination at night, and the centre console is logically laid out. On our LS model, the dash has a fabric finish, while you have to look in out-of-the-way places to find the sort of cheap plastics that used to be common in the firm’s cars. The indicator stalks and steering wheel are shared with Vauxhall, and the latter is attractive to look at and good to hold.

There’s also a decent range of reach and rake adjustment, while the driver’s seat sinks lower than that in the Cee’d, so you get a greater sense of space in the Chevy. Achieving the perfect position would be easier if it wasn’t for the ratchet seatback adjuster, but comfort is hard to fault. Passenger room in the rear is on a par with the Kia, while the Cruze’s 450-litre load area is 110 litres bigger. Yet the narrow boot opening limits this advantage, as really large items simply won’t fit inside.

Up front, the Cruze’s 2.0-litre VCDi diesel engine delivers more power than the smaller-capacity Cee’d unit, but the Chevy is 60kg heavier and doesn’t have a significant performance advantage. Initial pick-up is punchier and the car covers 0-60mph in 10.3 seconds – that’s two seconds quicker than its rival. But if you get caught out of the powerband, the Chevrolet labours, due to its long gearing and five-speed box. Plus, at certain points in the rev range, diesel rattle filters through to the cabin.

In corners, the light but positive steering delivers decent turn-in and there is plenty of grip. Yet the dynamics are let down by body roll when cornering hard and limited feedback from the controls. Softer suspension than in the Kia means the Cruze absorbs bumps well, but it still fidgets over imperfections and some road noise makes it into the cabin. Of course, the Chevy’s trump card is its £14,345 price – but while it offers a good blend of space and quality, the Kia is even cheaper. Will that cost the Cruze dear?

Chart position: 2WHY: Packed with equipment and competitively priced, the diesel-engined Cruze should be the pick of the saloon range.