Raft of revisions improves hatch – and green model gets stop-start. 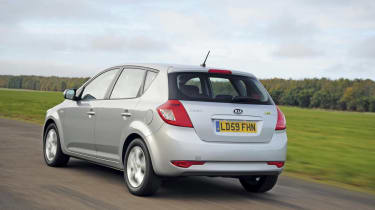 Conceived from the outset to appeal to European tastes, the Cee’d has a well proportioned shape and inoffensive lines, and looks solid and modern. As the car is only two years old, Kia hasn’t messed with the formula for the facelift. At the front, a slim new grille, reshaped bumper, fresh bonnet and restyled headlights give it a sharper nose, while at the rear the new lamp clusters have an LED-effect design.

These subtle exterior changes are very effective, yet buyers are more likely to be impressed by what’s happened inside. The simple but smart dash has been reworked, with large, easy-to-use switches and a central console angled towards the driver.

As with the original Cee’d, everything is robustly screwed together, too. But Kia has made real strides with the sense of quality inside the new hatchback. The tones and textures of the cabin materials have been enhanced, and an attractive three-spoke multifunction steering wheel is added.

The driving position is impressive, too. There is plenty of reach and rake movement on the steering column, plus the seat adjusts for height. Lift the bonnet and you’ll find the 89bhp 1.6-litre CRDi diesel. In EcoDynamics spec, this emits only 110g/km of CO2, and performance is adequate, despite its modest power output.

It took two seconds longer to cover 0-60mph than the 123bhp Chevrolet, with a time of 12.3 seconds. But the Cee’d is much better in-gear. It has a six-speed manual box, with well spaced ratios, and it was more responsive than the Cruze in fourth and fifth. Power delivery is smooth, and aside from a small amount of rattle as the engine picks up from idle, refinement is good.

Although the new stop-start system is unobtrusive in operation, even small electrical loads can cause it to stop working. Once you come to a halt at traffic lights, for example, and select neutral, the engine switches off automatically. But turn on the air-con as you wait, and the diesel fires up! To make matters worse, first gear is stiff to engage – which doesn’t encourage you to slip into neutral and activate the system in the first place. Even so, we averaged 47.8mpg on test, and low emissions make it a cheaper company car than the Chevy.

Kia’s update for the Cee’d hasn’t all been about saving fuel, though. The firm has also re-engineered the suspension, and claims this makes the hatch more involving to drive. It’s certainly sharper handling and more communicative than the Cruze, if not quite up to the best in the family car class.

The steering is positive and delivers better feel, while body movement is tightly controlled. Grip is reassuring, too. Along smooth roads, the ride is composed, but over broken surfaces, the suspension gets unsettled, and relatively firm damping means judders enter the cabin.

On the whole, the changes to the Cee’d are a success. It’s improved in several areas, and retains its generous kit and seven-year warranty. But will the more powerful Chevy leave it trailing?

Chart position: 1WHY: It’s only two years old, but a comprehensive update makes the Cee’d even more attractive than before.