Good looks define the best hot hatches – so which stands out? 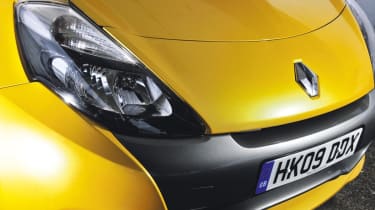 For many hot hatch buyers, style is as important as substance. A great example of the breed needs sporty design cues and eye-catching details if it’s to stand out from the crowd.

The Bocanegra certainly succeeds in this respect – there’s no mistaking it for any other version of the Ibiza. The glossy black finish on the nose attracts the most attention, but the headlamps also benefit from smoked lenses. Other racy additions include the 19-inch alloy wheels and distinctive centre-exit exhaust.

Elsewhere, the newcomer takes its design cues from the Ibiza Cupra. It features the same sweeping character lines cut into its flanks, as well as the prominent chin spoiler and honeycomb pattern grille.

But while the MINI offers seemingly endless scope for personalisation, buyers won’t get much chance to make their mark on the SEAT when they place their order. Only two paint finishes are available – the solid Candy White of our test model and a dark metallic red. There’s also the option of a panoramic glass sunroof, which costs an extra £450.

But while the Ibiza clearly catches the eye, it can’t match the Renault for visual impact. As part of last year’s makeover, company designers gave the French three-door a muscular new look.

A wider track front and rear means bulging wheelarch extensions, while at the back, below the bumper, is an F1-style diffuser and two large exhaust tailpipes. The race-bred look of our Clio was enhanced by optional 17-inch Raider alloy wheels, which at £178 appear a good-value upgrade. Behind their spokes is a set of large Brembo brake calipers – this hints at the Renaultsport’s incredible stopping power.

Our test car’s kerb appeal was given a further boost by its Liquid Yellow metallic paint – although this bright finish will set you back an eye-watering £1,226. For a better-value colour upgrade, choose the Speedline alloys – these £178 optional rims come in black or white. There’s also a bold-looking tailgate spoiler, for £204. Yet while all these extras allow buyers to make their car stand out, the Clio can’t match the MINI for personalisation.

The characterful British car has become a familiar fixture on UK roads. With its cheeky, retro-style looks and desirable image, the second-generation hatch has continued the MINI sales success story since its launch in 2006.

The Cooper S sits below the raucous JCW in the line-up, and uses subtle design cues to hint at its performance potential. The front bumper is slightly deeper than on the standard Cooper, while the bonnet gets a large air intake which feeds the turbocharger’s intercooler.

At the rear is an integrated roof spoiler and twin centre-exit exhausts. Neat details include the race-inspired metal-finish fuel filler flap, plus subtle S badges on the front wings.

What really sets the MINI apart, though, is the array of cosmetic tweaks on offer. Buyers can specify black or white paint for the roof, plus there are various colour choices for the bonnet stripes and a range of alloy wheel designs.

And it doesn’t end there. The long options list includes an aerodynamic bodykit, extra lights, additional chrome trim and a panoramic sunroof. As you’d expect, these features come at a cost – add them all and the Cooper S’s price will rise to in excess of £20,000. Even without them, though, the Brit remains an attractive choice. It doesn’t have the raw hot hatch appeal of the Clio, but still offers plenty of charm.

Ratings Renault 5/5 The Clio is in a league of its own for muscular hot hatch appeal. By adding a wider track and bulging wheelarch extensions, plus the rear diffuser, the designers have given it a genuine race-bred look. The attractive gunmetal nose was introduced as part of last year’s facelift, although our model’s garish metallic yellow paint is an expensive £1,226 option. MINI 4/5 YOU could argue that the MINI has become a victim of its own success. It doesn’t stand out as much as it once did, as it’s such a common sight on UK roads. But there is huge scope for buyers to personalise their car, so no two look the same. Cooper S gets bonnet scoop, tailgate spoiler, centrally mounted twin tailpipes and 16-inch alloy wheels as standard. SEAT 4/5 Look past the distinctive black nose and you’ll find the Bocanegra is virtually identical to the cheaper Ibiza Cupra. That means you get a deeper front bumper than on the regular hatch, as well as a centre-exit exhaust and graphite grey 17-inch alloys. Buyers are limited to red or white exterior paint finishes.