SEAT has unleashed its Ibiza Bocanegra – but is it a hot hatch class leader? We pitch it against two rivals in four key buying areas. 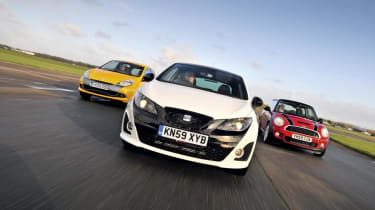 Is this the car that will help SEAT nose ahead of hot hatch rivals? The Bocanegra pays homage to the first model to be developed from the ground up by the brand.

The 1200 Sport launched in 1975, and was nicknamed Bocanegra – Spanish for black mouth – due to its integrated black front bumper. Now, 35 years later, SEAT has applied the badge to the Ibiza Cupra – and the newcomer gets a unique bumper, with honeycomb grille and vents, finished in menacing black.

At the back, it’s marked out by dark inserts in the exhaust and a bold Bocanegra badge. Similar details feature inside, although the car is the same under the skin as the Cupra. Powered by the VW Group’s twin-charged 1.4-litre TSI unit, that model featured in our Performance Car of the Year 2009 shoot-out. Now, its flashier brother takes on two of the most talented hot hatches ever.

The Renaultsport Clio 200 is fresh from a mid-life update, and remains the benchmark for driver thrills. But if the Bocanegra is to attract image-conscious customers, it must beat the MINI Cooper S, too. Read on to see if the fresh-faced SEAT has what it takes to top the class.

The Bocanegra upholds SEAT’s reputation as a sporty brand. It shares the same grown-up personality as the Ibiza Cupra. The state-of-the-art powerplant serves up excellent performance, while the paddleshift gearbox gives the car a high-end feel.

It’s not only refined and practical, but also good value for money and generously equipped. Yet while the SEAT is very accomplished, it doesn’t offer the engaging driving experience or ultimate agility of its rivals. And even accepting the styling tweaks, its hard to justify the £700 price premium the Bocanegra carries over the Cupra. So despite its abilities, it finishes third here.

Both our other contenders can lay claim to the top spot. The MINI is a fantastic ownership prospect, and is cheaper to tax, insure and service than the Clio. A unique blend of performance, interior quality and character makes it a truly great hot hatch. It’s superbly engineered and offers polished handling. Yet the Brit can’t match the Renault’s razor-sharp reflexes. The Clio has a superb chassis, generous kit and decent practicality, too – so it wins this test by a narrow margin.