Which supermini has the best real-world pace? On your marks... 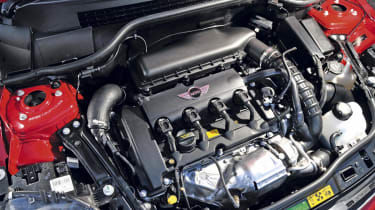 One of the main reasons for buying a hot hatch is straight-line performance. But while 0-60mph times grab all the headlines, in-gear acceleration figures are just as relevant – as these highlight a model’s performance in the real world.

The new SEAT’s 1.4-litre engine is fitted with a turbo and a supercharger, and delivers an impressive 250Nm of torque, so you’d expect the car to perform well. In our 30-70mph in-gear test at the track, the Ibiza recorded a great time of 5.9 seconds.

To put that in perspective, an Audi TTS or Nissan 370Z have proved only half-a-second faster in that test. Part of the reason is the quick-shifting DSG twin-clutch gearbox that is fitted as standard to the Bocanegra. Swift changes ensure the SEAT is virtually relentless in its acceleration. Add a clever launch control system, and the car powers off the line incredibly quickly.

The Ibiza accelerates with a minimum of fuss – so much so that it doesn’t feel especially fast. But the figures don’t lie: we covered 0-60mph in only 6.7 seconds. That’s half-a-second quicker than SEAT’s official time, and is even more amazing when you consider all three cars were rated in cold and damp track conditions.

If only the Bocanegra had the personality to back up this performance – in this respect, it’s really left behind by the Clio. While everything is dealt with efficiently, the engine note lacks character. What’s more, the pedal travel set-up combines with the smooth gearbox to dull the throttle response – the car simply isn’t dramatic enough from behind the wheel. The Clio on the other hand has character in abundance – the naturally aspirated engine sounds more race-bred than road-biased.

Even though peak torque doesn’t arrive until 5,400rpm, the Renault still manages an impressive turn of speed – it completed our 30mph-70mph in-gear test in seven seconds.

The weather conditions meant the lightweight Clio struggled off the line – its 0-60mph time of 8.2 seconds was disappointing. However, we’ve dispatched the sprint in only seven seconds in this car in the past. Plus, sharp throttle response and a snappy gearshift mean extracting the Clio’s performance is easy, and this car loves to be worked hard – it revs keenly all the way to the 7,100rpm red line.

The easiest car to drive quickly is the MINI. It serves up similar power and torque to the Bocanegra, and recorded strong performance figures. But it’s by far the most refined, so its true speed is often deceptive.

Judge these cars by looking at their numbers, and the SEAT is a clear winner. But there’s much more to a hot hatch than this. In the real world, the Renault matches the Ibiza, while the MINI edges ahead of its rivals in this part of our test.

Ratings MINI 5/5 IT’S not as fast as the Ibiza or as exciting as the Clio, but the Cooper S is so easy to drive quickly that it had to top our performance table. The torquey engine, six-speed transmission and sharp controls mean everything feels just right from behind the wheel. Add impeccable refinement, and the Brit is the simplest car to live with day to day.

SEAT 4/5 WE can’t argue with the effectiveness of the SEAT’s twin-charged TSI engine. It provides the Bocanegra with the strongest straight-line pace in our test. The lightning-fast shifts of the seven-speed gearbox can also take some credit for this. But the Ibiza doesn’t offer the character of its rivals – it makes more sense as a comfortable GT. Renault 4/5 Raucous and raw describe the Renault, even though it has more soundproofing than the previous model. This isn’t a criticism, as it makes the Clio addictive to drive. The naturally aspirated engine responds keenly and has a race-bred soundtrack. If only it delivered on this with mid-range muscle to match its forced induction rivals.