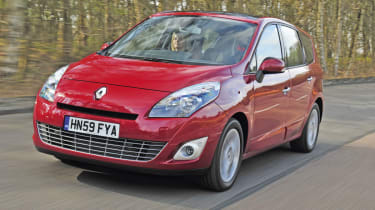 When Renault unveiled its seven-seat Espace to an unsuspecting world in 1984, it gave rise to a whole new sector. Twelve years later, the company wowed its competitors again with the Mégane Scenic – a car with nearly as much flexibility as its bigger brother but with only five seats and a smaller footprint. Fast forward to 2010, and the Grand Scenic aims to provide the best of both worlds, with a seven-passenger cabin and compact body.

The family resemblance to the five-seat model is obvious, thanks to its familiar silhouette and trademark corporate nose. And while the car doesn’t look as fresh as the Peugeot, it’s still a modern and clean-cut design. Details such as the oversized headlamps, body-coloured rubbing strips on the door bottoms and metal-look exterior trim add visual interest. Vertical tail-lights border the large hatch, and the low window line means the Scenic also feels brighter than its rival inside.

Renault plays its trump card in the cabin, because even a short trip is enough to feel the benefit of the firm’s MPV expertise. Up front there’s plenty of room, and while the driving position is upright, the high-level gearlever and supportive seats make it a comfortable place to be.

The attractive dashboard looks good but the digital instruments have the potential to divide opinion and the audio controls are needlessly over-complicated. Further back, the Scenic impresses thanks to its generously proportioned second and third row of seats, which provide more room than its rival.

If you need to maximise load space, the middle row can be removed – unlike in the Peugeot – and the front passenger chair folded flat. The Grand Scenic’s more intuitive seats make it easier to take advantage of the vast array of configurations on offer.

Neither of these cars will comfortably accommodate adults in the rearmost seats, but the Renault’s offer slightly more room. And while the 5008 gives the most boot space with the chairs folded, with all of them occupied the Scenic provides 208 litres – Peugeot doesn’t even quote a figure for this configuration. Against the clock, the Renault is marginally quicker than its rival in the lower gears. This gap increases at higher speeds, where the extra torque of the 2.0 dCi is telling. Smoother ride comfort makes the Scenic more relaxing to drive, but especially bumpy roads can upset the interior calm.

The Renault was also top of the stops, with a more positive pedal feel than the Peugeot and superior outright performance. In fact, the Scenic has a lot in common with the Mégane saloon, thanks to well weighted controls and a nimble chassis.

The car’s green credentials are its biggest letdown, as it has the higher emissions and fuel consumption here. But the Grand Scenic is hugely competent, and still presents a formidable challenge to any newcomer hoping to take class honours.

Chart position: 1WHY: The Scenic has been a leading player in the compact MPV segment since 1997. Will Renault’s expertise prove to be the decisive factor?