Peugeot hopes its stylish, versatile new 5008 will shake up the seven-seater MPV market. But can it beat the established Grand Scenic from Renault? 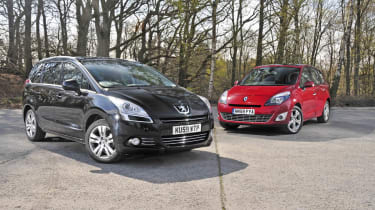 Peugeot has got the family car bit between its teeth! The RCZ coupe is busy stealing headlines, but the firm isn’t neglecting more practical matters. First came the 3008 crossover, while the latest double-0 model provides seven seats. The 5008 is a full-sized MPV, putting it up against some serious rivals.

They don’t come much tougher than the Renault Grand Scenic. Only last week, its little brother, the five-seat Scenic, saw off the challenge of the new Vauxhall Meriva in diesel guise and range-topping Exclusive trim.

That puts it on a level footing with the Grand Scenic Dynamique dCi 160 TomTom on price. Both are packed with safety equipment, loaded with family-friendly features and have similar power outputs and seating layouts.

It’s likely to be a closely fought contest – but which seven-seater will come out on top?

Buyers really are spoiled for choice here. Both of our contenders are practical family models, and with a revised Ford S-MAX on the horizon, this segment has never been stronger. The new 5008 proves that Peugeot is on the comeback trail, following up the success of the excellent RCZ coupe. But is the seven-seater good enough to beat the godfather of the compact MPV sector? Nearly. With plenty of equipment, a competitive price and strong engine, it’s a fine choice. Lower running costs and superior predicted residual values add to the appeal, but the Renault clinches a narrow victory. Setting the Grand Scenic apart is its sharper handling, spacious and user-friendly seating in the second and third rows, plus a versatile load area. The firm that invented the MPV concept remains at the top of the game.