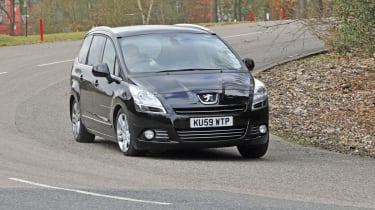 Is the 5008 set to become the new face of family motoring? Lined up next to the Renault, it shares the well proportioned approach of its rival, but its sober looks leave you in no doubt this is intended to be a model focused on practicality above all else.

Climb aboard and you’ll find a good driving position, with a high-set gearlever, plenty of wheel and seat adjustment and excellent visibility. The pedals, however, are set too close to the driver, compromising comfort.

Peugeot has incorporated some intelligent design tricks in the cabin. These neat touches start with the middle row of seats. The squabs of the outer chairs flip up, and the whole ensemble concertinas together as you slide the backrests forward, providing better access to the third row of seats than in the Renault.

Bizarrely, climbing into the middle row can be painful, as the hard tray tables fixed to the front seat-backs are perfectly placed to ‘bite’ your knees. This flaw is magnified by average rear legroom, which makes the middle line-up much less accommodating than in the Grand Scenic. And while adults can squeeze into the Renault’s third row when the seats in front are pushed back, this isn’t possible in the 5008.

The fact that the Peugeot has a slightly shorter wheelbase clearly puts it at a slight disadvantage here, but headroom is similar in both cars and all of the seats in the 5008 fold flat. However, the mechanisms to operate them are more fiddly, and the middle row can’t be removed as in the Renault.

On the plus side, the 5008 has many family friendly features including rear sunblinds, underfloor storage cubbies, a supplementary rear view mirror to help keep an eye on the kids and a host of 12V sockets.

Firing up the 150bhp engine shows off Peugeot’s diesel expertise. The strong unit provides a broad spread of power and is smooth to rev and quiet at speed. Unfortunately, the slack, long-throw box reduces driver enjoyment. With a 40Nm torque deficit, the 5008 is slower to respond in higher gears than its rival, and was 1.2 seconds slower from 50-70mph in sixth.

In corners, the steering is sharp and the big machine turns in crisply, but its light action has an artificial feel. And while the handling is safe and predictable, the 5008 relies heavily on its stability control system in extreme situations.

The spongy brake pedal disappoints, too. The soft suspension isn’t as effective as the Renault’s set-up: it can react stiffly to bumps and potholes despite being tuned to deliver comfort rather than agility. However, road roar is well insulated and the MPV makes a refined motorway cruiser.

On this evidence, the Peugeot is flawed, with uninspiring dynamics and compromised second-row seating. But in Exclusive trim, it has better residuals and lower emissions than its rival here.

Chart position: 2WHY: Peugeot is in the midst of an impressive product offensive. Can the 5008 maintain the momentum? That is what we aim to find out here.