The Peugeot 5008 mixes seven-seat practicality with an upmarket interior 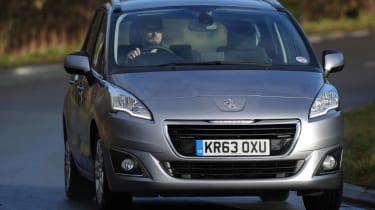 The Peugeot 5008 is a mid-size family MPV that features a practical, seven-seat interior and acres of boot space. It was launched in 2009 to compete in a conservative market segment packed with competent rivals such as the Citroen Grand C4 Picasso, Vauxhall Zafira Tourer and Ford S-MAX.

It may be smaller than the old Peugeot 807 that competed head-on with full-size MPVs like the Seat Alhambra and Ford Galaxy, but the 5008 is arguably more eye-catching than most of its rivals, with elegant looks that were further enhanced in 2014 by a mid-life facelift.

The 5008 shares its underpinnings with one of its closest rivals, the more radically-styled Grand C4 Picasso, both being based on an extended version of the Peugeot 308 SW’s platform. The 5008 also shares engines with the 308 range, including the latest ‘down-sized’ PureTech 1.2-litre three-cylinder petrol unit, which uses up-to-date technology to provide the performance of a bigger engine with greater efficiency.

Most versions of the 5008 are likely to be sold with economical diesels though, as the line-up includes 1.6- and 2.0-litre BlueHDI options offering 118bhp and 148bhp respectively. Like the 308 hatch, the 5008 is also offered with Peugeot’s latest Quickshift six-speed automatic gearbox.

There are only two trim levels to choose from in the 5008 line-up, but both offer a comfortable environment with plenty of luxurious features. It’s also worth noting that the car is only available in seven-seat guise here in the UK, although a five-seater is sold in other markets.

The range-topping Allure spec adds much more kit, including a panoramic glass roof, 18 inch alloys, reversing camera and a pop-up navigation screen on the dash.

Since its facelift in 2014, the Peugeot 5008 people carrier has added an extra splash of style to an already convincing package. The revamp has also brought a refreshed engine line-up that now includes the PSA group’s excellent PureTech three-cylinder petrol, and latest BlueHDi diesel options.

The 5008 has surprisingly good handling, plus a comfortable ride and a refined interior. The load area beats rivals from Renault, Citroen and Ford, and there's enough room to seat seven people. High equipment levels make the 5008 look good value, although the depreciation and reliability stories are a little less convincing.

It may not be the class-leader, but the 5008 remains a pretty good all-round bet. We’d take the 1.6 BlueHDi diesel in Active trim for its mix of efficiency and value.

The 5008 is a comfortable way to transport your family, thanks to a relatively soft suspension set-up. The ride helps the car soak up even the largest potholes, although the steering wheel does tend to wriggle around in your hands when you drive over broken surfaces.

The rest of the time, the steering is light and accurate, which inspires confidence when cornering. Plus, Dynamic Roll Control fitted on some models means the body is kept in check on faster corners.

The engines are all solid when it comes to load-carrying ability and economy, but the car can struggle to pick up speed in higher gears - even if you’re driving the most powerful 149bhp 2.0 BlueHDi diesel. 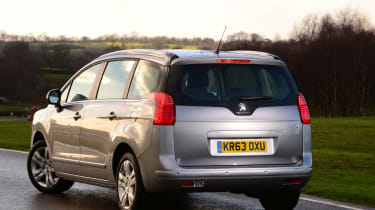 The manual gearbox has quite a long throw, which can make it a bit irritating to use, too.

Overall, the 5008 is at its best on the motorway - engine and road noise is kept low, and the comfortable set-up means long journeys are a breeze.

The PSA Peugeot Citroen group’s engine line-up took a leap forward when the highly regarded PureTech three-cylinder 1.2-litre unit was introduced in 2014. High-tech features include direct injection and weight-saving construction but the little three-pot engine has got a big heart. In the 5008 it delivers 118bhp thanks to turbocharging, which gives the big MPV a decent turn of speed. 0-62mph comes up in 10.9 seconds in the official figures, and top speed is 123mph – and it’s also worth mentioning there’s no auto option.

Although the 1.2 petrol is reasonably spritely it’s not the fastest off the line in the 5008 line-up. That honour belongs to the 2.0-litre four-cylinder BlueHDi diesel, which boasts 148bhp. It can knock-off the 0-62mph sprint in 9.9 seconds, is flat out at 121mph, and like the petrol model is available with manual gears only.

The 118bhp 1.6-litre BlueHDi diesel is the engine to go for if you need an automatic, although it’s half a second slower to 62mph than the manual 5008 with the same engine – 12.8 seconds versus 12.2 seconds.

Good value pricing and fuel-efficiency are plus points, but the Peugeot’s depreciation is a worry

The 1.6 BlueHDi diesel engine is the top-seller in the Peugeot 5008 line-up, and returns 65.7mpg in the official figures. However, that's a little way behind the equivalent Citroen Grand C4 Picasso, which returns over 70mpg in the official ‘combined cycle’ economy tests. You’ll also lose a mile and a half out of every gallon if you opt for a 5008 running the biggest 18 inch wheels.

But drive sensibly, and the 5008's diesel engine should return close to the manufacturer's claim, especially on a motorway run, where the long gearing keeps the engine ticking over more slowly. Emissions aren’t too bad either, at 113g/km of CO2 on 17-inch wheels – or 115g/km on 18s.

The 2.0 BlueHDi is more powerful, but it’s more efficient too. Combined cycle fuel consumption could be as high as 68.9mpg according to Peugeot, or 67.3mpg on the bigger wheels. CO2 emissions are 108g/km and 110g/km respectively, so road tax will be cheap either way. 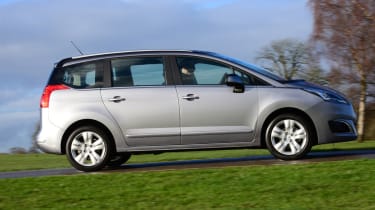 While the three-cylinder petrol engine is cheaper to buy, it lacks the torque of the diesels, which can hamper economy, especially if you load the car up with people and their luggage. Peugeot claims 52.3mpg, while emissions are up to 124g/km.

The 5008 is well-equipped for the money too, with air-con, electric windows and alloy wheels standard across the range. You can also opt for a head-up display, panoramic sunroof and rear-seat entertainment.

Insurance groups are competitive for the Peugeot 5008’s size and performance. They start at group 18 for the 129bhp petrol and 118bhp BlueHDi models, rising to 23 for the Allure model with 148bhp 2.0-litre BlueHDi power.

Low resale values are a bit of a bugbear for Peugeot across the board, and in spite of its practicality the 5008 doesn’t buck the trend. The 1.2 petrol is likely to suffer most, with predicted residuals of as little as 25 per cent for the Active model over three years/30,000 miles. Higher spec diesels are likely to sink to around 30 per cent of their new value over the same period and miles.

The Peugeot 5008 might be a big family MPV, but it still looks good on the outside and has a very smart interior. The headlights, front grille and bumper have been updated as part of a mid-life facelift, bringing the looks into line with the newest models in Peugeot range.

Like the 308, and 2008 crossover, the 5008’s windscreen is very large and gives good forward visibility, while the darkened pillars and wrap-around lights help the car stand out from the MPV crowd. Opt for Allure spec, and the panoramic glass roof panel gives the interior a palatial, spacious air - as well as creating interesting new perspectives for passengers in the back.

In the cabin, the large, sweeping dashboard means the interior is as stylish as the exterior, and the chrome dials and a raised gearlever - which sits on a stepped section of the centre console – are both features that help to raise the interest levels. 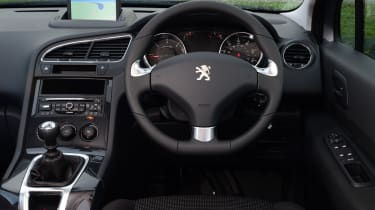 The layout of the buttons and switches is straightforward and it doesn't look cluttered. The fit and finish is pretty good too, with lots of soft feel plastics and everything screwed together solidly. If you want to improve the ambience further you can specify leather trim, while the exterior can be finished in optional pearlescent white for a really extravagant feel.

Top 5008 models come with a colour heads-up display that projects information onto the windscreen in front of the driver, while the pop-up nav system that sits on top of the dashboard is standard on the Allure but optional on the Active.

The system is called Peugeot Connect Navigation and also includes Bluetooth, but DAB digital radio remains an optional extra on the Allure.

If you want Bluetooth connectivity on the Active model, you need to specify it as part of one of the optional Connect Navigation packages.

Aside from a lack of oddment space, the Peugeot 5008 leaves little to gripe about

Unlike the Citroen C4 Picasso the 5008 doesn’t come in normal and ‘Grand’ versions. The Peugeot is offered only as a large seven-seater MPV, so it’s naturally a practical car. There are compromises though, as the third row of seats is cramped and – potentially more significantly - there's not much storage space in the cabin either. Specifically, there’s nowhere on the dash to store loose items and the 5008’s glovebox is tiny, although there is some storage under the floor beneath the middle row of seats – which also have tray tables. When you think about how much stuff families need to store in the car, we reckon Peugeot could have tackled the issue better.

That said, the car has comfortable seating and a good driving position with great visibility from the higher ride height, and standard parking sensors make urban driving a breeze too.

The Peugeot’s clever independent folding seat system makes getting into the rear seats easy enough for almost anyone - each seat can be moved separately. There’s loads of headroom too, even if you have the glass roof, which loses a couple of cms of airspace. 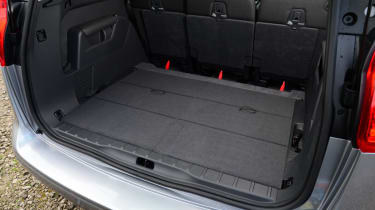 But while the third row of seats is good enough for children, adults will find it a bit cramped and it's not ideal for long journeys. There are three Isofix child seat mounting points in the middle row, and of course three-point seat belts for three adults too.

With all of the seats folded down you get a huge 2,506 litres of boot space, which means carrying large items is easy. It easily beats the SEAT Alhambra – an MPV from the class above - which offers 2,297 litres with its seats down. Even with the seats in place the 5008 has an impressive 679 litres of boot volume.

Safety is not an issue for the 5008, but there are questions over its reliability record

Thanks to a five-star rating from Euro NCAP, we're sure that the 5008 is a very safe car - and the solid handling helps it to feel safe on the road as well. A long curtain airbag that stretches all the way back along the sides of the car is standard on all versions, as are ESP, emergency brake assist, and tyre pressure sensors.

The 2015 Auto Express Driver Power customer satisfaction survey, however, saw Peugeot brand finishing 31st out of 32 overall - not a good sign. Indeed, the pre-facelift version of this same car managed to rank only 135th out of 200 cars when scored for Reliability, and it was rated 200th – dead last – by owners for Build Quality. (The Citroen C4 Picasso scored 160th for Reliability, but 156th for Build Quality.)

This latest version of the 5008 seems decently well-built though, and Peugeot has been making efforts to improve its record. So although it looks bad for the 5008, we wouldn't assume it will be a nightmare to live with. 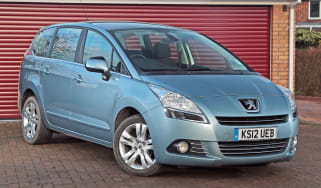 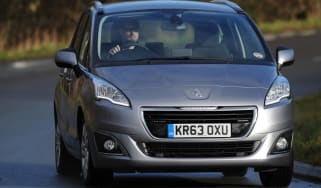 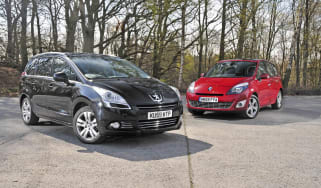 Peugeot hopes its stylish, versatile new 5008 will shake up the seven-seater MPV market. But can it beat the established Grand Scenic from Renault?
Peugeot 5008 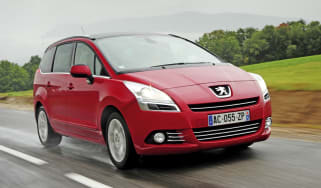