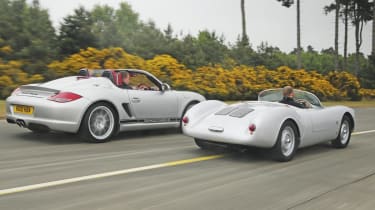 SOMETIMES fame is earned for all the wrong reasons. Take the Porsche 550 Spyder, for example. Introduced in 1953, the mid-engined road racer gained notoriety after Hollywood legend James Dean was killed behind the wheel of his own example, called ‘Little Bastard’, on 30 September 1955.

This tragic event dominated headlines, drawing attention away from the lightweight Porsche’s many racing successes, which were to include a victory in Italy’s Targa Florio event in 1956. In honour of these often forgotten achievements, the firm has revived the evocative Spyder name for a special version of its Boxster roadster.

The flagship two-seater is the lightest, most powerful and fastest Boxster you can buy. At £45,603, it’s also the priciest –although it will set you back much less than an original 550 Spyder, examples of which regularly sell for nearly £1million! If you’ve got your heart set on the Fifties machine – and your budget is more Asda than Abramovich – then there are a number of faithful replicas to choose from, including the Brazilian- made Chamonix seen here.

While prices vary depending on specification, £30,000 buys you a car that will fool all but the sharpest-eyed Porsche enthusiasts. It uses fibreglass for the bodywork, rather than the real 550’s aluminium, yet the lustrous paint finish makes it difficult to tell the difference.

Park the two cars side-by-side and the difference in size is shocking. The 550 Spyder looks like a Dinky toy next to its modern-day namesake, which is taller, longer and wider. Ignore the difference in scale, though, and it’s not hard to see the family resemblances. Both share raised front wings and the same balanced proportions, while the Boxster’s low-slung fabric hood adds a dash of retro appeal. What it lacks is the Chamonix’s charming period details, such as the exposed metal petrol filler cap in the bonnet and brown leather straps securing the engine cover.

Inside, both cars feature vibrant leather trim, but that’s as far as the similarities go. The Chamonix’s cabin is basic, with two thinly padded bucket seats, a smattering of dials and, well, little else. You’ll have to go without a heater, while the side windows are held in place by wing nuts. With the far from watertight fabric roof in place, most occupants will find their head wedged against the ceiling. The Boxster’s hood allows a lot more headroom, although folding it is time-consuming and fiddly.

Various Heath Robinson-style levers, catches and poppers need to be released before the two-piece item can be rolled up and placed in the boot. At least the spacious cabin is more straightforward, thanks to its perfect driving position and logically laid out dash. However, bosses haven’t forgotten the Spyder’s stripped-out roots, so you’ll discover lightweight fabric pulls for the door handles, and air-conditioning relegated to the options list. As a result, it tips the scales at 1,275kg – a saving of 80kg over the standard S model.

Tweaks to the 3.4-litre flat-six engine boost power by 10bhp to 316bhp, and there’s also a stiffer suspension set-up. Our test car had the seven-speed PDK twin clutch gearbox, which hikes the price by £1,962. Its conventional wheel-mounted shift paddles are an essential £277 extra.

The Boxster is sensational to drive. With the exception of the numb shift paddles, the controls are perfectly weighted, the precise steering has bags of feedback and wide Michelin Sport tyres serve up huge grip.

The Chamonix can’t match it for pace and poise. But once you’ve got used to the slightly offset driving position, floor-hinged pedals and vague gearshift, it is great fun. Behind the driver is an air-cooled, 115bhp VW-sourced 1.9-litre engine, but with only 590kg to haul around, it blasts the Spyder from 0-60mph in 6.5 seconds. The low kerbweight also results in excellent agility on twisty roads, while the wood-rimmed steering wheel brims with feel. Only the poor brakes highlight its 57-year-old design.

Both these models struggle to provide value for money. The new car tops the Boxster line-up, but delivers less equipment and refinement than lower-spec models, while the Chamonix is only a few thousand pounds cheaper than an entry-level Boxster – a car you could use every day. However, for sheer thrills per mile, both of these Porsches are worth every penny.

Go Back toVW California vs. Camper
Continue ReadingFacts and figures