Does the best-selling roadster make as much sense with a hard roof? 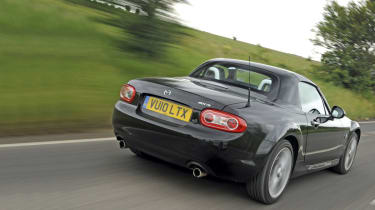 Given that the MX-5 is in the Guinness Book of Records as the most successful roadster of all-time, you wouldn’t think Mazda needed to introduce a folding hard-top version. However, demand for a car that offered improved comfort and security saw the MX-5 Roadster Coupé arrive in showrooms in 2006.

The MX-5 is the only car here that offers a choice of soft or hard-tops. They’re hard to tell apart, as all the panels up to and including the doors are identical, but the RC’s rear deck is slightly higher and longer.

Mazda’s designers did a superb job, because the simple lines haven’t been ruined by the transformation. Engineered with the help of experts at Webasto, the 20mm thick two-part plastic composite roof weighs only 18kg more than the fabric hood. Add the electric motors, and in total, the hard-top adds an impressively low 37kg to the MX-5’s overall bulk.

As part of a facelift last year, the firm underscored the premium nature of the RC by introducing special exterior design details and improved cabin insulation. On the outside, it gets a subtly different mesh grille and chrome headlamp bezels, while extra sound deadening in the front section of the roof helps to reduce cabin noise at speed.

The folding operation hasn’t changed, though: simply release a catch and press a button for just over 15 seconds until the lid folds out of sight. While it’s quicker to manually stow the hood in the regular car, the RC has an identical 150-litre boot, and the large glass rear screen means visibility is better than in the soft-top with the roof in place. Crucially, the extra weight of the hood hasn’t altered the MX-5’s 50:50 weight balance, and the rear-wheel-drive chassis also remains a delight.

The larger hole required to stow the roof could have compromised body stiffness, but reinforcing brackets compensate, while the more rigid top has allowed Mazda to fit firmer suspension. The differences are small, though, and the fun handling and direct responses are unaffected.

Inside, the snug driving position, simple cabin and attractive three-spoke steering wheel leave you in no doubt that you’re in a proper sports car. The steering provides plenty of feedback, and although there’s lots of body movement in bends, the MX-5 is agile.

Our car featured the Powershift auto box, which means the limited-slip differential is removed, and this takes the edge off its dynamics. Plus, while the six-speeder is great in town and offers manual control via steering wheel buttons, it leaves you feeling detached from the driving experience.

WHY: In hard-top Roadster Coupé form, the MX-5 loses none of the simple appeal and fun factor of its fabric-roofed stablemate.