Does ageing design detract from the appeal of prestige grand tourer? 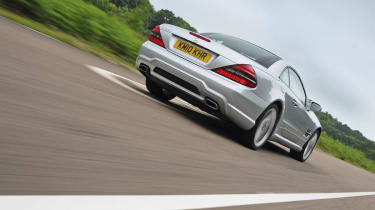 Meet one of the world’s most established luxury sports cars. The Mercedes SL has been on sale in various guises since 1954. And following the success of the folding hard-top on the smaller SLK, it was no surprise that the technology was introduced on the flagship cabrio in 2001.

A major facelift and round of mechanical improvements in 2008 kept the SL up to date, but look past the familiar Mercedes face of the reworked model, and it’s starting to appear a bit dated.

The problem isn’t terminal, though, and the £2,860 optional AMG body styling kit fitted to our car improves matters. It includes deeper front and rear aprons, plus side skirts, and gives the SL an aggressive edge without taking away any of the car’s class. Inside, the model’s age is much more obvious. The dash design is old-fashioned, while lots of the switchgear is a generation behind the more attractive buttons and switches found in modern Mercedes models. The shiny finish on the transmission tunnel feels and looks cheap for a car in this price range.

Sit down and things improve. The seats are comfortable and there’s plenty of space around the driver. When it comes to everyday usability, you get handy storage boxes behind the front seats, while the large rear screen provides excellent visibility. Our car’s £1,440 glass top lets lots of light into the cabin, too.

The roof is the crowning glory of the SL. The folding mechanism is fully automated, with the two-part hard-top stowing away in only 17.5 seconds. It reduces the 339-litre load area by 104 litres in the process, but even with the hood down, there’s a reasonable amount of luggage space below the protective boot divider.

Mercedes knows a thing or two about how to make great convertibles, and it shows. You get a fabric wind deflector and heated seats as standard, while the firm’s £420 Airscarf system wafts warm air around your neck. All of this makes the SL great to drive with the roof down in almost any weather.

Once you’ve got the wind in your hair, the SL 350’s 3.5-litre V6 goes some way to making up for the deficiencies of the cabin. It’s silky smooth but relatively tame, and really comes alive from 4,500rpm, remaining tuneful up to maximum revs. Performance is strong and linear rather than blistering, and the smooth-shifting 7G-Tronic automatic transmission is a perfect match.

In corners, the SL is capable but not engaging. It’s a cruiser rather than an out-and-out sports car; the steering could be more precise, while the chassis feels numb. It’s composed, though, and the £2,640 optional Active Body Control suspension set-up ensures sharp handling.

The traction control is slightly intrusive, but the Mercedes coupé-cabriolet still inspires plenty of confidence.

It’s relatively comfortable, too, although the firm ride means vibrations are sent through the body when you go over coarse surfaces. Even so, it’s easy to see why the SL remains such a popular and respected hard-top roadster.

WHY: With a history that stretches back to the Fifties, the SL is one of the most evocative Mercedes models ever made