Latest roadster is more tempting than ever with hard-top 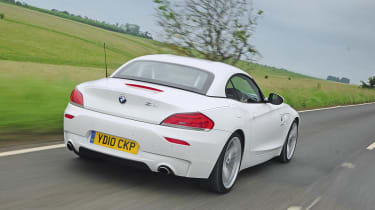 THE first-generation Z4 was a big success for BMW. With its ‘flame-surfaced’ bodywork, sharp driving dynamics and strong engines, the distinctive roadster was an instant hit with UK buyers when it went on sale in 2003.

But the sporty cabriolet sector never stands still. So, in a bid to attract buyers who value cruising comfort and practicality as much as performance and driving fun, the latest Z4, launched last year, underwent a revolution. It grew in size and ditched its fabric hood in favour of a folding hard-top.

Despite these changes, the car has stayed true to the original – although the sharp creases and bold angles have been softened and straightened, the BMW is still eye-catching. The stylish swept-back headlamps work well with the famous kidney grille, and the design at the rear hasn’t been compromised by the need to store the metal hood panels.

Bosses claim the aluminium roof is only 30kg heavier than the fabric set-up it replaces. Plus, BMW moved production from its US plant in South Carolina to Germany, so the car could be assembled alongside another hard-top: the 3-Series Cabriolet. It’s clear the firm was serious from the outset about ensuring the Z4 provided excellent cabin refinement – and it has delivered.

The roadster is well insulated from wind noise with the roof up, and it’s also hard to fault the folding mechanism – simply press the button on the centre console, and the two-piece lid stows in 23 seconds. The hard-top does eat into boot space, however; when it’s folded, the available space shrinks from 310 litres to a cramped 180 litres.

On the move, buffeting is kept to a minimum, although at speed you’ll welcome the £210 optional wind deflector, which fits neatly between the roll hoops.

The cabin wraps around the driver, and the low-slung driving position makes it easy to get comfortable. The dash’s modern finish and first-class switchgear provide a classy ambience, while there’s a decent amount of space around the driver, with lots of leg, shoulder and headroom.

What sets the new top-of-the-range 35is model apart is its performance. The smooth 3.0-litre twin-turbo straight-six produces 33bhp and 50Nm more than the standard 35i’s unit, while a short-term extra boost of turbo pressure provides a further 50Nm of torque in higher gears to help overtaking.

With the firm’s excellent seven-speed DCT dual-clutch transmission offering smooth changes and a wide spread of ratios, the Z4 delivers scintillating in-gear punch. The crisp exhaust note is fantastic and the handling impresses, too. The new flagship rides 10mm lower than lesser Z4s, and the variable damper control ensures it feels sharp and precise from behind the wheel. Strong brakes and communicative controls add to the appeal.

The Z4 is fantastic whether its roof is in place or folded – it has grown up, without losing any of its youthful exuberance.