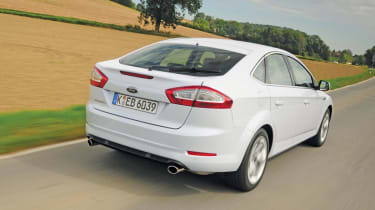 The Ford Mondeo has been a mainstay for British car buyers since 1993. It is a fleet and family favourite thanks to its blend of sharp driving dynamics, practicality and neat styling.

The current model arrived in 2007 and has aged well, so the latest changes have been kept to a minimum – on the outside, at least. Compare old with new and you’ll notice a fresh grille and front bumper, LED lights, a redesigned tailgate and minor trim changes.

It’s the front that shows the most dramatic difference, with daytime running lights set into the redesigned bumper and a reprofiled bonnet. The rear isn’t quite as appealing, because the high-set tailgate can look a little tall and stunted. Still, the chrome finish to the twin exhaust pipes adds a sporty feel to the diesel flagship. So too do the sharp-looking 18-inch alloy wheels fitted to our test model.

Buyers expecting a massive change to the interior will be disappointed, as the revisions have concentrated on improving the existing layout. Fresh graphics have been applied to the instruments, LED cabin lighting now features, and standard kit has been boosted to keep up with rivals.

The overall atmosphere has improved, and the Ford can now be regarded in the same league as the elegant and sophisticated Skoda.

However, there are some cheaper plastics on show if you look for them – namely the window switches and the lower sections of the doors and dashboard. Even so, it still ranks ahead of the more basic Mazda.

Plenty of adjustment to the wheel and seat means the driving position is good, but the chair lacks support and doesn’t sit as low or feel as sporty as the Mazda’s. However, gadget lovers will appreciate the wide array of features on the revised Ford. Lane Departure Warning, Driver Alert and Auto High Beam systems are all now available.

The former uses a forward-facing camera to monitor the road and send a vibration through the wheel if you stray from the designated lane. It worked well on the motorway, but we disabled it on back roads because it proved over-sensitive to the twisting white lines. In the back, the Ford can’t match the Skoda in terms of legroom, but there’s more space than in the Mazda, and the rear seats are comfortable, even for adults.

The big news is the engine, though. Headline figures of 197bhp and 450Nm are 27bhp and 100Nm more than the Skoda. It all adds up to excellent pace, with the 0-60mph sprint dispatched in 8.6 seconds. In-gear and 30-70mph times are similarly impressive.

However, the figures don’t tell the whole story. And while peak torque is on tap from as little as 1,750rpm, it starts to tail off by 3,000rpm – making for a very narrow power band. The result is a lot of gearchanging, something you’re not forced to do in the Superb. The Ford’s Duratorq unit can’t match the refinement provided by the Skoda’s 2.0-litre TDI, either.

The Mondeo picks up marks where you would expect. Its six-speed manual gearbox is slick-shifting and combines with the positive brakes to ensure an involving drive. In fact, on twisting roads you can throw the hatchback around as if it was a much smaller car.

Our test model was fitted with adaptive damping, which allows you to tailor the ride quality using Sport, Comfort and Normal modes.

We found the best compromise was leaving it in the latter, where it struck the right balance between the softer Superb and firmer Mazda. That helped the Ford’s performance on twisting roads. With the least body roll on test and wonderfully communicative and weighted steering, it really inspired confidence.

Due to our short time with the Ford, we were unable to run a representative fuel economy test, but the Mondeo’s combined claim is the worst of our trio, at 47.0mpg. CO2 emissions prove to be similarly uninspiring, and its output of 159g/km puts the most powerful diesel on test in the highest tax bracket of our trio, with an annual liability of £155.

With inspiring dynamics, a spacious and high-quality interior, as well as strong performance, the Mondeo puts in a thoroughly impressive showing. But will it be enough to put the Ford back at the top of the large family car class?

Chart position: 3WHY: Every new Ford Mondeo has big boots to fill. James Bond gave the latest car its original debut, so does this mid-life facelift provide it with a licence to thrill?