Performance flagship really turns up the temperature on baby Brit 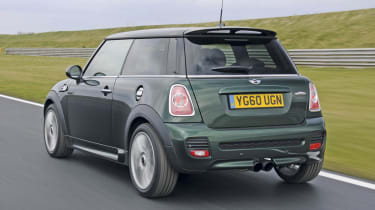 2
Every MINI comes with handling that’s sure to put a smile on your face. From the entry-level First to the John Cooper Works flagship, the British-built supermini’s popularity is based on its fun character. And the hottest version of them all comes into this contest as a former class favourite, so it’s not simply here to make up the numbers.
From the outside, there’s little to differentiate the performance model from its lesser stablemates. Subtly revised bumpers, smart cross-spoke alloy wheels and lower side sills set it apart, but considering the popularity of cosmetic enhancements with MINI owners, it’s often hard to tell high-spec versions apart from more affordable models. Still, the John Cooper Works benefits from the raft of recent changes to the range, with distinctive new LED rear lights among the most obvious tweaks.
Inside, you get the familiar MINI cabin, with its oversized central speedo, Sixties-style toggle switches and upright windscreen. Kit is sparse, given the £22,320 asking price, and you’ll have to visit the options list if you want items such as cruise control (£175), Bluetooth (£295) or a trip computer (£105). Our car’s leather trim costs £1,300.
There’s huge scope to spend even more, as the extras list is one of the longest in the industry. But no matter how much you add, you’ll still face the old MINI gripes of limited rear legroom and a tiny 160-litre boot.
Is the John Cooper Works so good on the road it doesn’t matter? Well, it sounds the part, thanks to a burbling exhaust note. Even at idle there’s a sign of what’s to come when you hit the road.
When you do, the first thing to strike you is the hardcore nature of the experience. The firm suspension is well damped, but as with the Renault, you feel every single bump and imperfection in the surface.
In damp conditions, and on poorly surfaced tarmac, there’s also torque steer under hard acceleration, the wheel fidgeting in your hands as the front tyres scrabble to put the 1.6-litre turbo’s 208bhp to good use.
In these conditions, the MINI demands concentration to drive quickly and smoothly, as it’s easily knocked off course by camber changes and mid-corner bumps. This frenetic nature is enjoyable but tiring, and there will be times when you long for the more relaxed charms of the Citroen or less flighty Renault. But then you’ll come across a tempting corner or roundabout, and all will instantly be forgiven.
Turn into a bend, and the JCW responds to the precise steering with incredible immediacy, and tightly controlled body roll. At the track, it’s also easy to unstick the rear tyres with a timely lift
of the throttle. And once you’ve gathered it up, the MINI blasts out of corners with a lot more vigour than either of its rivals, feeling impressively swift from behind the wheel.
A snappy gearshift and powerful brakes complete the JCW package. Yet despite its attractions, the MINI struggles to justify its hefty premium over the Renaultsport Clio.

Chart position: 2WHY: Rapid JCW is a former Auto Express pocket rocket champion, thanks to its blend of sizzling straight-line performance and sharp dynamics. Can a recent revamp help it regain its crown?