Does new flagship deliver on promise of its looks? 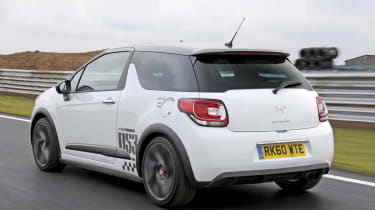 6
The Citroen DS3 was one of the surprise packages of 2010. Tackling the might of the premium supermini sector was never going to be easy, but the new model has taken some notable scalps – from the Audi A1 and MINI Cooper to the Alfa Romeo MiTo Cloverleaf. Can the top-of-the-range Racing model continue this winning streak?
Judging by appearances, the latest model is going to be a handful – as it’s a real eyeful. Exclusivity is guaranteed by the fact that Citroen is bringing only 200 examples here, but you will definitely remember seeing one of these cars!
Video: watch CarBuyer's video review of the Citroen DS3
[[{"type":"media","view_mode":"content_narrow","fid":"69256","attributes":{"alt":"","class":"media-image"}}]]
Tweaks to the suspension provide a wider track (up 30mm front and rear) and lower ride height (by 15mm), and these changes combine with carbon fibre wheelarch extensions and chunky alloys to give the Racing a low and aggressive stance – as if it has just driven off a tarmac rally stage. Plus, real carbon fibre is used for the grille surround and side rubbing strips.
Only two colour schemes are available, and while the white and grey combination of our test car looks understated, the black and orange alternative is anything but.
In either case, optional decals add to the in-your-face attitude for another £450. These extend to the dashboard if you pay the extra – but thankfully the rest of the cabin is more sophisticated.
It shares the same distinctive instrument cluster as the lesser DSport, but gains some racy equipment, including a sports steering wheel, complete with tactile carbon fibre inserts.
You also get sporty drilled alloy pedals, while carbon trim features on the centre console and around the internal door handles. With its satin sheen and exposed weave, this expensive material adds a real sense of quality to the cabin. Elsewhere, luxuries such as climate control, Bluetooth and a USB connector make for an impressive haul of standard equipment – enough
to leave both of its opponents in this test in the shade.
The sports seats are the biggest disappointment.
While they look great, some of our testers struggled to get comfortable behind the wheel, and they have very deep backrests, which eat into rear legroom. This robs the DS3 of somepracticality, although it does have a generous 285-litre boot.
Good hot hatches don’t only need to be user-friendly, though; they have to be born entertainers, too. And that’s where the Citroen slips up.
The attention-grabbing exterior and racy interior mean buyers will be expecting a raucous driving experience – and the DS3 doesn’t deliver on the road. The 204bhp turbocharged 1.6-litre engine is virtually identical to the 208bhp unit in the MINI, but it’s much quieter in the Citroen. This would be fine in a test of saloon cars, although in a hot hatch comparison, the Racing is left trailing by the lively sounding John Cooper Works, which is in a different league in terms of aural appeal.
The DS3 can’t match the Brit’s raspy note, and doesn’t emit the same pops and bangs on the overrun. On motorways, it displays perfect manners, and feels much more mature than the MINI – which settles down to a slight drone. But the trade-off is that while the Citroen delivers broadly similar straight-line pace, the John Cooper Works feels faster.
Accelerate hard out of a corner in the DS3, and there’s surprisingly little drama, as grip is impressive and you don’t feel the wheel tugging at your hands over camber and surface changes as you do in the MINI. It’s also less likely to be deflected by bumps and ruts. But while the hugely capable Racing model inspires much more confidence from behind the wheel, it isn’t as much fun.
On paper, it sounds great – the brilliant uprated brakes are progressive, while the gearshift is smooth and fast. Yet the end result is strangely uninvolving.
Turn into a bend and the DS3 responds calmly and efficiently, while a mid-corner lift of the throttle will tighten your line reassuringly. It isn’t as playful or adjustable as its competitors, though, and while the steering is precise and accurate, it isn’t as immediate, either.
The suspension soaks up bumps more effectively than either of the other cars in this test, and it’s more refined. The question is, are these really the most important ingredients in the hot hatch recipe?

Chart position: 3WHY: It looks wild, while motorsport-inspired mechanical tweaks give the new DS3 Racing scorching pace – and we see if this is enough to take it to the top of the hot hatch podium.