Our current champ offers sizzling performance at an attractive price 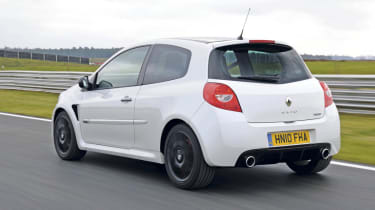 4
French manufacturer Renault has real hot hatch pedigree. Ever since it invented the 5 Turbo, it has mined a rich seam of go-faster models – and the current Clio 200 is the king of the supermini class.
We’re not huge fans of the styling revisions inflicted on the latest car as part of its mid-life facelift, but the performance flagship wears them really well. Its gloss black nose, wider front wings and smart alloy wheels strike just the right note.
Entry-level 200 Cup models cost £16,810 and feature few toys inside, but come with lower and stiffer suspension, red Brembo brake calipers and anthracite alloys. The Clio 200 carries a
£1,000 premium, and gains a host of luxuries, such as climate and cruise control, plus a leather steering wheel. But it does without the lesser model’s racy chassis settings. Confusingly, the stiffer springs and dampers of the Cup version, and its wheels and brakes, can be specified as a £450 option in the more expensive car – and that’s what we test here.
Our model was also fitted with optional Recaro seats (£1,020). But even with all these add-ons, the Renaultsport is comfortably the cheapest of our trio. Given its mainstream underpinnings, it’s no surprise that it feels cheaper inside than the Citroen and MINI. But the price reflects this, and the Clio is easily the most versatile, with more rear legroom and boot space than its rivals.
The driving position is perfect, and the firm Recaro sports seats hold you snugly in place, while the workmanlike cabin is perfectly suited to the task in hand – the no-frills layout allows you to make the most of the thrilling engine. Its maximum output of 202bhp is produced at a heady 7,100rpm, so you really have to work it to make the most of its performance.
Closely stacked gear ratios (70mph in sixth equates to 3,200rpm) and a slick shift make this great fun, and as the revs rise, so does the volume.
The engine thrives on hard work, and you find yourself maximising every gear just for the screaming soundtrack and surge of acceleration as it reaches the red line.
It trails the other cars for straight-line pace – it was eight-tenths behind from 0-60mph, with a time of 7.3 seconds – but this is irrelevant once you get behind the wheel. The Renault feels faster than its figures suggest and dives into corners with more enthusiasm than the Citroen and more composure than the MINI.
Grip is predictably strong, and you can steer the car on the throttle with real accuracy if you adjust the pedal midway through a corner. It’s thrilling stuff, and soon has you hooked as you
blast towards the next bend to experience it all over again.
Alternatively, the Clio rewards a more precise and tidy approach, so you can enjoy it regardless of your mood or road conditions. The low-speed ride may be harsh, and it’s a frenetic motorway companion, but few cars egg you on in this way. And even fewer provide such dynamic rewards when you respond.

Chart position: 1WHY: On performance per pound, the Renaultsport Clio 200 takes some beating. With its revvy normally aspirated engine and stiff Cup chassis, it’s a hardcore choice.