Established 1-Series relies on traditional approach to efficient motoring - can it still compete with the ultra high-tech Lexus? 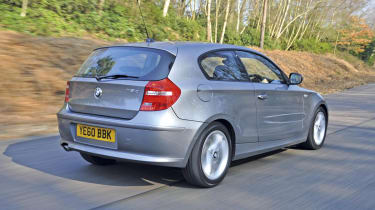 Engineers at BMW have blazed a trail by maximising the economy of traditional diesel engines. But the question is, does the 118d do enough to meet the challenge laid down by the hybrid Lexus?

In terms of style, the 1-Series enjoys the taste of success before it even gets to a fuel pump. It’s difficult to describe the BMW as pretty, but alongside the dated Lexus, it has the edge with its understated lines and familiar grille. Neat details such as the tailgate badge, which doubles as a boot release, add to its appeal.

This low-key approach is a highlight of the interior, too. The simple and clutter-free cabin is a study in minimalism after a stint behind the wheel of the Lexus – although it provides far fewer toys to play with. While climate control and rear parking sensors come as standard on this SE model, you’ll need to visit the options list to get the Bluetooth, USB input and leather upholstery that’s included on its rival.

There’s little between our contenders for rear space, but the 1-Series has a pronounced transmission tunnel, which robs passengers of foot room in the back. And although the 330-litre load area trails most family hatches, it’s more user-friendly than the shallow boot provided by the Lexus.

The BMW has never sold on its practicality, though. Instead, it trades on its image, rear-wheel-drive handling and frugal engines – and this 2.0-litre diesel model certainly out-punches its hybrid competitor, producing more than twice as much torque, at 300Nm.

Matched to a six-speed gearbox, the engine delivers potent performance. At the test track, it hauled the 118d from 30-70mph in 9.6 seconds – that’s 2.1 seconds faster than the CT 200h.

An agile chassis helps to harness this straight-line performance. The weighty steering delivers plenty of feedback, and there’s far more front-end bite. Unlike the Lexus, you can pitch the BMW confidently into bends at speed as there’s plenty of grip and minimal roll.

What’s more, SE trim represents the sweet spot of the range. The entertaining and rewarding dynamics aren’t compromised by the overly firm suspension that marks out M Sport models. So the BMW is faster, more engaging to drive and offers better comfort than the Lexus.

But is all that enough for it to secure victory? Well, it’s equally refined at high cruising speeds and, most importantly, proved a match for the petrol-electric model on economy.

In fact, during their time in our hands, our duo had identical returns of 39.6mpg. The 118d’s energy-saving stop-start and brake-regeneration technologies provide impressive results. Only the higher pump price of diesel and the dirtier CO2 emissions threaten to spoil BMW’s celebrations.