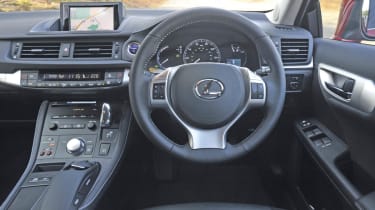 The CT 200h is cheaper, smaller and lighter than any Lexus that has gone before it. However, compared to the likes of BMW and Audi, which have been building compact premium models for years, the brand lacks experience – and it shows. The CT 200h doesn’t have the instant kerb appeal of the 1-Series.

The Japanese firm’s designers have obviously set out to make an impression, but the end result is a busy mix of hatchback lines and fussy details. Despite the Toyota iQ-style wraparound rear screen, fashionable LED daytime running lamps and glitzy tail-light clusters, the CT 200h looks dated alongside the older BMW.

However, as Lexus is hardly famed for its eye-catching styling, this is unlikely to deter buyers attracted to its premium badge. Mid-range SE-L trim provides plenty of kit, although the cabin can’t match the quality of the firm’s larger models. The silver plastic highlights on the dashboard and steering wheel look cheap, while the leather trim lacks a heavyweight feel.

Elsewhere, the controls for the heated seats, aux-in and USB inputs, which reside in a tiny lidded compartment, are needlessly overcomplicated. In summary, the cabin doesn’t live up to the CT 200h’s prestige billing. And while there’s decent space in the back, the privacy glass and thick C-pillars cut out light, making it feel smaller than it is. The 1.8-litre engine and electric motor/battery set-up is, in essence, the same one fitted to the Toyota Prius. Performance is reasonable, but the 118d destroys the CT 200h against the clock, accelerating from 0-60mph more than two seconds faster, in 9.4 seconds. And the new car feels slower than the figures suggest, as its engine assumes a monotone character under hard acceleration – when the CVT fixes the revs high in the range.

Drivers can choose from three modes, selected using the silver dial in the middle of the centre console. Twist it left to optimise economy, press it for the default Normal setting, and spin it to the right to enjoy the sharper throttle and gearbox responses of Sport. Select the last of these, and the instrument panel's eco gauge makes way for a traditional rev counter, with the blue backlighting replaced by a racy red tinge.

Unfortunately, the rest of the driving experience doesn’t exactly encourage sporty progress, as the steering is numb and front-end bite is limited compared to the grippy BMW’s. Really lean on the Lexus and there’s also too much roll, while the firm suspension is uncomfortable at low speeds.

The only fun to be had is from making the most of the CT 200h’s drivetrain and storing up enough battery life to deploy its silent all-electric running to best effect. The ability to drive at up to 30mph using only battery power is a neat trick, and helps cut consumption. This, combined with the car’s ultra-low CO2 emissions, will be justification enough for many tech-loving young executives.