Our current number one remains a great car to drive 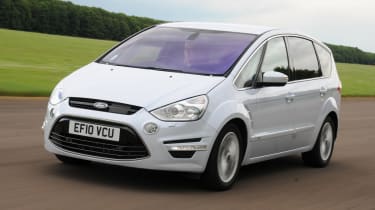 4
Proving practical cars don’t have to be boring to look at, the S-MAX brings a bit of edge to the MPV sector. Sharp headlights, deep-set foglamps and sports car-inspired side vents all give it plenty of character.
Inside, an excellent driving position and supportive seats make the cabin immediately welcoming. Also, big quarter-light windows and thin A-pillars mean it doesn’t suffer the blindspots of its Spanish rival.
Video: watch CarBuyer's video review of the Ford S-MAX
[[{"type":"media","view_mode":"content_narrow","fid":"69257","attributes":{"alt":"","class":"media-image"}}]]
With a chrome strip and soft-touch materials on the dash plus an ebony centre console, there is an executive car feel inside. However, look in out-of-the-way places and you’ll find a few lower-quality plastics. Also, the £1,300 optional navigation system’s integrated audio and climate touchscreen controls are not as straightforward to use as the SEAT’s conventional buttons.
These niggles aside, cabin quality is easily a match for the newer SEAT’s, while standard kit includes Bluetooth, parking sensors, heat-reflecting glass and a Quickclear heated windscreen. This driver focus doesn’t mean the S-MAX lacks practicality, though. As with its rival, the middle-row chairs slide independently and legroom is very similar, while the floor is flatter.
Where the Ford trails is in the very rear. As it’s shorter than the Alhambra, the third row isn’t quite as accommodating. Access is a little tighter and there isn’t as much room once you’re seated. The upright seatbacks mean you’ll struggle for comfort on long trips. Plus, if load carrying is a priority, it’s worth noting that the Ford’s ultimate load volumes (measured to the rooflining) are smaller than the SEAT’s in both two and five-seat configurations. While the S-MAX’s seats fold in the same way as its rival’s, the procedure is trickier, and the lever actions aren’t as slick.
However, when it comes to the driving experience the Ford takes the lead. All the controls are beautifully weighted and there’s a level of involvement and feedback that you simply don’t expect from a large MPV.
In fact, its sharp responses and agility are such that, from behind the wheel, the Ford shrinks around you. It feels more like an agile hatchback than an MPV, with superb body control, plenty of grip and more enthusiasm for corners than the SEAT. But the really impressive thing is that this fun factor doesn’t come at the expense of comfort.
Admittedly our test car had the £1,750 Adaptive Cruise pack option, which includes Ford’s IVDC suspension system (see head-to-head, opposite), and the electronic dampers deliver an unflappable ride and great suspension control.
The 2.0 TDCi is another dynamic highlight. It is smooth and refined, and our 161bhp version is cheaper than the less powerful 138bhp SEAT. It also enjoys a sizable performance advantage, so it’s faster both from a standing start and in-gear. With its revised engines and enhanced looks, the latest S-MAX is as good as ever.

Chart position: 2WHY: Our current class favourite looks smart, is great to drive, practical and refined. Rivals don’t come any tougher than this...