Does the new-generation Spanish MPV offer enough to climb to the top of the class? 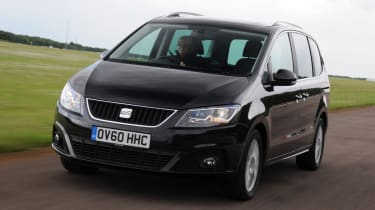 4
After enjoying an incredible 15-year shelf-life, the outgoing Alhambra was crying out for replacement. Younger rivals had stolen a march on the value-for-money offering, but this all-new model brings SEAT’s MPV bang up to date.
There’s not much scope for the Spanish flair we’ve come to expect from the brand, but there are obvious reasons why. Firstly, the practical demands of an MPV make boxy outlines a necessity. Secondly, the Alhambra was a joint initiative with Volkswagen, so it shares much of its DNA with the Sharan.
Video: watch CarBuyer's video review of the SEAT Alhambra
[[{"type":"media","view_mode":"content_narrow","fid":"68682","attributes":{"alt":"","class":"media-image"}}]]
Parked next to the sporty S-MAX the big SEAT doesn’t look very exciting, but few people are likely to be offended by its conservative lines. SE trim includes classy touches such as chrome roof rails and window surrounds. At the back, the runners for the sliding side doors look unsightly, but the trade-off is superior access to the cabin in tight spaces. And the doors open to reveal a functional and very well assembled interior.
The three seats in the middle row slide back and forth independently, and in their rearmost positions give excellent legroom. The chunky doors slightly restrict elbow space for occupants in the outer chairs, and there’s a hump in the floor for the transmission tunnel, but these are minor niggles. Overall, the large windows and generous headroom mean passenger comfort is superb. The outer chairs tilt and slide forwards with ease, creating a wide gap through which to access the third row.
Even in the very back there’s sufficient headroom for adults, while your feet have plenty of space under the bases of the row in front. It’s easier to exit the rearmost seats in the SEAT than in the Ford, too, thanks to the second row’s simpler folding action.
Legroom in the back is cramped with the middle row chairs in their rearmost position, but move them forward, and the Alhambra has space to carry seven adults in relative comfort. In this respect the SEAT has the edge over the Ford. All the latches and handles used to manipulate the chairs feel robust and are intuitive to use, too.
In full seven-seat mode there’s little between our duo in terms of load space. But with its chairs folded flat, the Alhambra has a bigger carrying capacity in five and two-person configurations.
It’s good news up front as well, because the SEAT features high-quality materials and rock-solid build quality. The dash layout is simple yet smart, while the chunky audio and heater controls are well placed. An electric parking brake frees up space for a large bin between the front seats, and you get a big dash-top cubby plus door pockets that are flock lined to stop items rattling about.
A tactile multifunction wheel is standard, and there’s a decent range of seat and steering wheel adjustment. Only the blind spots caused by the thick A-pillars upset the excellent driving position. The seats themselves offer less side support than the Ford’s, which highlights the Spanish car’s focus on comfort over handling. The softer set-up of the Alhambra means there’s more body roll than in the S-MAX, and while the SEAT’s steering is linear and well weighted, it lacks the fast reactions and feedback of the Ford’s.
In 138bhp trim, our Alhambra diesel’s throttle response was flat compared to the more powerful 161bhp Ford, and the S-MAX held a clear advantage against the clock. The Alhambra’s optional DSG transmission has smooth shifts which are well suited to MPV life, although it does push up the basic price by £1,270. Budget-conscious buyers will be better off with the manual, as it should also improve on the 35mpg fuel return we recorded.
Like for like, the SEAT is more costly than the Ford, but it has space on its side. Is that enough to claim the class crown?

Chart position: 1WHY: Long-awaited replacement for the original Alhambra has made SEAT a big player in the MPV segment once again.