Work, leisure, family, chores... today’s people carriers must fulfil all briefs. Is the new SEAT Alhambra a better multi-tasker than our current favourite, the Ford S-MAX? 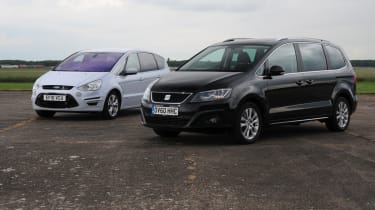 Modern MPVs are designed to cope with all that life can throw at them. Whether it’s the school run, a daily commute, a trip to the shops or some weekend fun, any class leader has to accommodate, rather than limit, your lifestyle needs.
The best of the breed aren’t only practical; they’re well built, refined and desirable, too. And here are two of our favourites. The SEAT Alhambra is a fine exponent of the MPV art, mixing a spacious cabin with family friendly touches such as sliding rear doors. Smart looks, impressive refinement and an efficient engine range make it a prime contender for top spot in the full-sized people carrier sector. Here we test the 2.0-litre TDI in mid-range SE trim to see how it rates.
Video: watch CarBuyer's video review of the SEAT Alhambra
[[{"type":"media","view_mode":"content_narrow","fid":"68682","attributes":{"alt":"","class":"media-image"}}]]
The biggest obstacle on the SEAT’s way to class domination is the Ford S-MAX. The blue oval machine is our current favourite in this sector, and mixes athletic looks with a healthy dollop of driver appeal and desirability. But with no sliding doors and a design that puts stylish looks ahead of the need for cabin space, does it still rank as the best people mover in the class?

If a large people carrier is the only car capable of meeting your motoring needs, then the good news is that both the MPVs in this test have appeal which extends beyond mere practicality. The S-MAX is impressively refined with a sporty styling edge and Ford’s typical handling engagement. But while middle-row comfort is on a par with the SEAT’s, the Alhambra offers more third-row space and a bigger boot. Cabin quality is first-rate, and safe handling plus a decent ride mean it’s relaxing to drive, too. Picking a winner depends on what you require from your MPV, though. We’re looking for the ultimate people carrier, which puts the larger and more practical Alhambra in pole position. If you carry seven only occasionally, the S-MAX’s limited third row will be less of an issue, so the cheaper Ford then makes more sense. But in this test, the SEAT’s space beats the Ford’s pace.