Our Alhambra was set a tough first task... A two week holiday to Spain 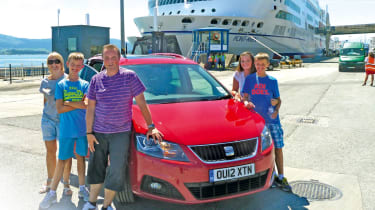 Talk about being thrown in at the deep end. Just days after our new SEAT Alhambra arrived in the UK, it was back on a ship and returning to mainland Europe, this time with the Fowler five and enough luggage for a couple of weeks away on board.

I suppose it’s a quick way to run a car in, but it’s also a quick way to check the credentials of this award-winning MPV – if it could impress us lot on holiday, it can impress anyone.

When planning our holiday to Barcelona, the obvious thing to do was to book flights – until we saw the price. Five of us, plus school holidays, equalled £2,000, plus car hire for a couple of weeks. Ouch.

So we headed for the Brittany Ferries website to investigate catching a ferry to Spain. It sounded like a bit of an adventure, and it was – a 24-hour crossing, a couple of comfy cabins and even a cinema on board. But the best bit was the price – £1,400. Even before the cost of car hire, we’d made a big saving. And driving from the port of Santander to Barcelona was another adventure.

It took its toll on our new Alhambra, which promptly grew a beard made from the suicidal midges that wanted to take a closer look at the fancy xenon headlights, front grille and us lot peering through the windscreen.

Before they met their untimely fate, they’d have probably wondered why we were smiling! Simple: for that sort of journey for my sort of family, the Alhambra was ideal.

Space is luxury, and with twin boys who will argue over the time of day, giving them and their sister enough room to relax is key. The three seats in the back are all the same size (adult size) and there’s plenty of legroom, too. There’s storage in the doors, under the floor and in the back of the front seats, plus trays for them to balance their drinks on.

As we were going to stay with friends, the extra two seats in the back would come in handy, but until then, we just enjoyed the massive boot, which easily took care of four suitcases and a selection of other goodies.

Best of all, though, was the comfort and refinement of the car – in spite of its size, it drives just like a VW Golf. No surprise really, as the Alhambra also appears as the VW Sharan, its slightly more expensive cousin.

Other than the sound of insects hitting the windscreen, the Alhambra was hushed on the Spanish motorways and the ride, even with standard run-flat tyres on some pretty ropey country roads, was reasonably settled.

We opted for the 168bhp SE Lux for a little more power than the 138bhp models (without much of an economy penalty), and for the long kit list. We loved the full-length, opening, panoramic sunroof, the leather seats, the powered tailgate, but most of all the handy electric sliding rear doors.

Our car also has a DAB radio and an okay stereo. There’s sat-nav, but its five-inch screen looks piddly and can be hard to follow.

Economy was adequate at 38mpg, but as we were running the car in we can expect that to improve with the Alhambra back into the day-to-day grind in the UK. Will it continue to impress the Fowler family? Watch this space.

“The Alhambra is very user-friendly. The electric sliding doors are handy when carrying the shopping, and it’s better to drive than an MPV should be.” Damion Smy, News reporter

“I’ve just driven the 170bhp Alhambra over 600 miles throughout Spain fully laden, including a large top box, and it was a pleasure to drive. A better package than anything Ford offers.”George210, via www.autoexpress.co.uk