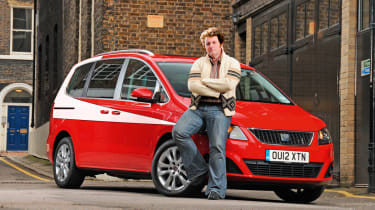 In pretty much every respect, the SEAT Alhambra is a brilliant car. Its primary role is family transport, but its talents run deeper – such as how it drives without the compromise you expect from a seven-seater.

If only it looked more exciting. I’m not suggesting SEAT should add a Starsky and Hutch stripe (although I happen to think it looks good), but I wish something could be done about the bland and boxy design. Ford can make its S-Max look something close to sexy, so it’s over to you, Seat. Why not a contrasting roof? Or stripes on the bonnet?

Of course, you should never judge a book by its cover, and we certainly haven’t – the Alhambra is a multiple award winner from ourselves and sister website CarBuyer.co.uk.

It’s become a firm favourite at home, too – my family is obviously less bothered by a car’s style than I am, and they love the Seat.

It arrived last summer in time for our annual holiday – a ferry crossing from Portsmouth to Santander followed by 1,200 miles driving in northern Spain. The car impressed us on its home turf, offering plenty of space and comfort.

With five seats in use, there’s still 658 litres of boot space – enough for all of our luggage, plus plenty of nick-nacks from our trip. And even with seven on board, there’s 267 litres of space, so we can go out in one car with the grandparents and fit my mother’s wheelchair.

With all my kids now adult-sized, the SEAT will cope with them in any of the three rows – rare for an MPV. The panoramic sunroof keeps the cabin bright, and was a highlight when we took friends on a tour of London recently – they were looking up there more than they were looking out the windows.

Also, the Alhambra hasn’t missed a beat in the last 12,000 miles. A warning light prompted me to top up with AdBlue – an additive that keeps emissions down. That cost £46.56, but a service isn’t due for a few thousand miles.

I did swap the standard tyres for a set of winter Dunlops, though. I was getting a bit concerned at the lack of front-end grip as the temperature plunged, and the extra traction came in handy when the snow fell. My car has the 168bhp 2.0-litre diesel under the bonnet, which is smooth and pokey – sometimes a little too much so for the front tyres.

Combined with the brilliant dual-clutch DSG auto box, it makes the SEAT a perfect commuting companion – easy in heavy traffic (where the stop-start system works well and has helped achieve a reasonable 38.7mpg) and quite fun when faster progress can be made.

In fact, apart from the interior space, it’s the Alhambra’s driving manners that impress the most. The ride is comfortable and the handling secure. It reminds me of driving a VW Golf – it’s so easy. Quality and style inside is Golf-like, too, so the view from the driver’s seat is superb.

Never mind what everyone else can see: it’s what my family and I enjoy inside that has made living with the SEAT Alhambra such a pleasure over the past nine months.

“There’s a stigma attached to MPVs, but the Alhambra breaks the mould. Smooth DSG gearbox makes it great to drive, while the electric sliding doors are brilliant.”Jack Rix, News editor

“Replaced our old Ford Galaxy with the Alhambra – it’s worlds better. Loads more space and drives like a luxury car. Our family is smitten.”Tom Peterson, via www.autoexpress.co.uk