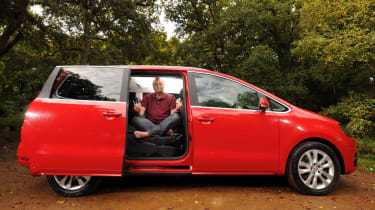 As a parent, sometimes all you want is an easy life, so a car that will keep the family happy and take the stress out of journeys is hugely important. With twin boys who can argue over the time of day, making sure they’re not constantly getting at each other in the back seats is a must.

Short of having a couple of cages in the back, the SEAT Alhambra does the job brilliantly, keeping them far enough apart with the help of my daughter (with headphones on) in the middle. Three same-sized seats are the key: nobody gets a raw deal, so there’s no reason to argue, right? I wish.

The full-length glass roof is popular, too, especially as it opens wide – not many of them do and I reckon it’s the closest you’ll get to a seven-seat convertible. Then there are the sliding rear doors, which my wife is a fan of, especially in tight parking spaces – the SEAT is a sizeable car. Still, she always says that space is luxury and there’s bags of both in the Alhambra.

It’s the way the big SEAT blends its talents that’s so impressive, but let’s start with the one negative: next to a Ford S-MAX or a Vauxhall Zafira Tourer, the Alhambra is about as exciting to look at as a pile of ironing.

My car’s bright red paintwork helps a bit, but there’s not much else to get enthused about. On the subject of red paint, when I ordered my car there was no charge for this non-metallic. But as of 1 January, it costs £195. Strangely, though, white is still free.

There is one other niggle. The view out is generally great with those big, deep windows. But whenever anyone’s been in the back and pulled the headrests up, they never put them back down, leaving my view in the rear view mirror obscured. The headrests are much easier to pull up than push down, too.

Great though the car is with the whole family (including the dogs) on board, it’s usually just me in the Alhambra. And this is when I enjoy it most – it just feels like a big VW Golf. That’s not surprising, as this SEAT is more like its VW cousin (the Sharan) than any other. But I love the slick-shifting DSG gearbox, the smooth ride and the comfortable seats – it’s a totally painless commuter car.

In fact, when a pal of mine asked for some recommendations for a family-friendly SUV, I stuck this MPV on the list for him to look at, too. He spends most of his time on motorways, where the Alhambra will be more frugal and more refined than any seven-seat SUV for the same money.

My car’s been in the wars recently, though, thanks to a lorry driver who forgot the back of his truck doesn’t precisely follow the front. I was lucky to get away with a deep scratch across the rear window and chrome strip, but I was without the car for a couple of weeks.

I took the opportunity to have winter tyres fitted while the car was at the dealer, as I’d noticed a lack of grip on slippier surfaces from the front tyres. My car has the 168bhp 2.0-litre diesel, which has useful mid-range power, but can make the tyres scrabble for grip when you’re pulling away.

Of course, since fitting winter tyres the weather’s been fine. But this is a British winter, so slippery stuff can’t be far away.

“Comfy seats, DAB radio and plenty of room make the Alhambra as relaxing as your lounge. But it’s a bit big when parking.”Tom Phillips, Web reporter

“For an MPV this car is an excellent drive, very comfy and cost effective. There are lots of gadgets, but the manual’s not user friendly.”KB, via Driver Power