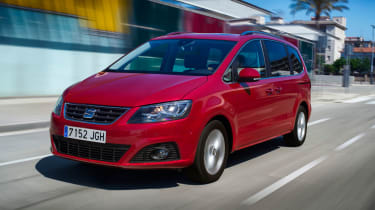 What made the pre-facelift second-generation Alhambra such a success for SEAT still rings true with this updated model. There’s only so much you can do to a boxy MPV in terms of aesthetics, but cramming in more kit, reducing running costs and updating on-board tech will appeal to those that matter the most, especially when you consider the value it offers against rivals.

The decision to buy an MPV is usually made out of necessity, not choice. A growing family means a shift in priorities, where image and performance make way for emissions and practicality, and the SEAT Alhambra has always answered customer’s needs on both front. Now there’s an updated version of the second-gen model, but never has it faced such strong opposition with the VW updating the Sharan and Ford introducing an all-new Galaxy. Fuel consumption has been cut by an average of 12 per cent across the range, more kit has been added and against its main rivals its value for money shines brighter than most. In comparison to a like for like Ford Galaxy and VW Sharan, the SEAT comes out at £660 and £1,745 cheaper respectively – savings not to be sniffed at. There is now a seven-seat BMW that can’t be ignored, too, but the 2 Series Gran Tourer is significantly smaller on the inside and once you reach for the options list and match the SEAT spec for spec, its price tag soon rockets. 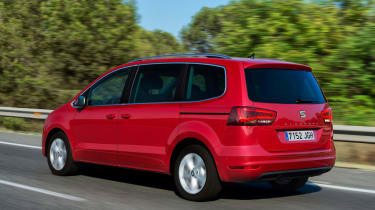 A set of new sharp head and tail lamps, reshaped grille and new alloy wheel designs are the minor changes you’ll notice, so still the Alhambra does still lack the flair of the Citroen Grand C4 Picasso and the sleeker proportions of the new Galaxy. Seven individual seats remain with the third row of seating still spacious enough to accommodate adults and gaining access couldn’t be easier thanks to a tilting as well as sliding middle row. The Galaxy has the upper hand when it comes to tech thanks to a fully automatic system for lowering and raising the seats but a simple tug on a lever will see each seat fall flush with the boot floor in the SEAT.

Even with all seven-seats in place, 267 litres of boot space remains behind the third row, which rises to 2,297 when you drop all five rear seats. That’s a match for the Sharan – as both the VW and SEAT are mechanically identical – and a not too noticeable 42 litres down on the Galaxy. 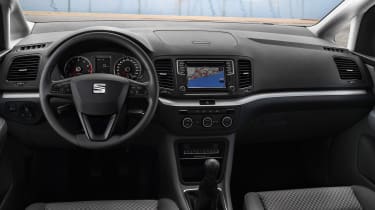 But what SEAT has also attempted to do with the latest Alhambra is inject a little more excitement into the driving experience. There’s a new 148bhp 1.4-litre turbo petrol while both of the 2.0-litre TDI engines have seen power upped by 10bhp, each now producing 148bhp and 182bhp. But crucially, fuel consumption has also improved, with our higher-powered diesel, six-speed manual test car returning a claimed 53.3mpg and 139g/km of CO2. There’s no escaping the Alhambra’s size on the road, but the cabin is incredibly bright and airy meaning great all round visibility. The steering weighty and direct which is reassuring when you’re at wheel as something as large as the Alhambra, while even on the biggest 18-inch, its never troubled by rutted tarmac, effortlessly flowing with road.   The 182bhp 2.0-litre engine commands a further £1,425 over the 148bhp model, but the additional 34bhp and 40Nm of torque makes it a worthwhile outlay. It feels more alert, picking up lower down in the rev range and its added sense of urgency when accelerating at higher-speeds is essential for a car designed to carry seven. 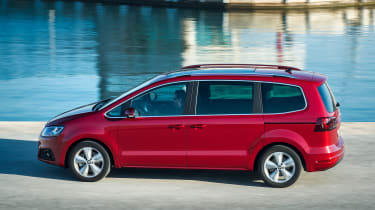 Perhaps what’s more impressive is how composed and surefooted the Alhambra feels when pushed. The high centre of gravity means there’s some noticeable lean in the corners but the body control is far better than that in the Galaxy, giving the impression that you’re driving something more compact. You can even spec it with adaptive dampers, offering up comfort, normal and sport settings, but in such a heavy and high-sided car there’s really no discernable difference between the three. At a £935 option you’re better off pocketing the cash or spending it on the electric doors and tailgate. Having said that, opt for a Style Advance model like our test car and the electrically operated doors and boot come as standard. So too does a full length panoramic roof, navigation with reversing camera and front sport seats trimmed in Alcantara. As ever, the cabin is very logically laid out and well constructed and although it may lack the neat design flushes of the C4 Grand Picasso, it’s built to last and will withstand the worst a family of seven can throw at it.