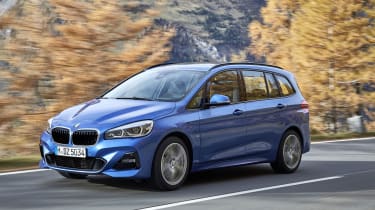 The BMW 2 Series Gran Tourer is a larger, more versatile version of the Active Tourer MPV, adding seven seats and a larger body to what is a distinctly family-friendly car from the German brand. A good range of frugal engines, good driving dynamics and a desirable badge all count in the GT’s favour, but it’s expensive; rivals like the Citroen Grand C4 SpaceTourer and Renault Grand Scenic offer much better value and flexibility for a good chunk less money.

If you need a car with space for a growing family but refuse to give up on driving fun and desirability, the 2 Series Grand Tourer is a good alternative to the mainstream.

Since the introduction of the 2 Series Gran Tourer, BMW really can claim to offer a car for every occasion. Not happy with the five-seat Active Tourer, BMW introduced the seven-seat Gran Tourer at the 2015 Geneva Motor Show, with sales starting just a few months later.

Aimed at people who think a Renault Grand Scenic, Citroen Grand C4 SpaceTourer or even a Volkswagen Touran is too mainstream, the 2 GT promises to be a car they not only need but one they actively desire. 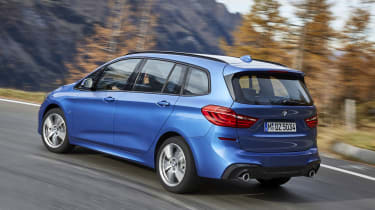 However, in order to make a seven-seater compact, you first need a front-wheel-drive platform – and only recently has BMW been brave enough to break with its rear-drive traditions. By using the new MINI hatchback architecture, BMW is able to introduce a new range of compact cars giving it access to previously untapped segments. Four trims – SE, Sport, Luxury and M Sport – comprise the range.

Engines range from the basic three-cylinder 216d diesel to the range-topping 220d with four-wheel drive. In between the two you’ll find a 218i and 220i petrol, as well as a 218d diesel.

The two more powerful diesels are expected to make up the bulk of sales, though it’s the lesser 216d that boast the most impressive fuel economy and emissions. Six-speed manual and eight-speed automatic gearboxes are on offer across the range. 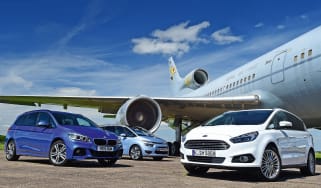 Ford is aiming high with its new S-MAX. Can it see off rivals from BMW and Citroen?
Skip to HeaderSkip to Content