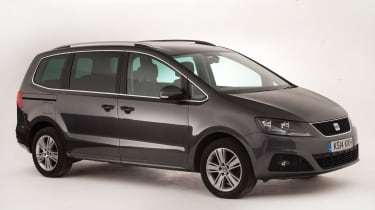 Although new-car buyers have generally fallen out of love with MPVs in recent years as they switch to crossovers, models such as the Alhambra show that there’s still plenty to love about these hugely practical vehicles. Despite its size, the SEAT is still good to drive, and you needn’t forego performance or economy, either – to a point. You also don’t need to spend a fortune to buy a well equipped example, as even the entry-level cars come with plenty of standard kit. So far, reliability is also proving to be pretty good, which helps to cut running costs even further. So before you buy that crossover for transporting the family, give an MPV – and specifically the Alhambra – some thought.

We’re big fans of the SEAT Alhambra. We crowned it Best MPV at our 2011 New Car Awards, and our sister title CarBuyer followed suit in 2012, as the Alhambra scooped another Best MPV gong.

At the time, we said: “These cars are the multi-tools of the automotive world, and the SEAT is both incredibly practical and easy to live with. A smart exterior and classy interior help seal the deal, while attractive prices and low running costs take care of your wallet.” But you no longer need to dig deep for such talents, as prices start at £10,000.

The SEAT Alhambra has been on sale in the UK since 1996. The original model was replaced by the Mk2 in 2010, and it’s this latest version that we’re looking at here. 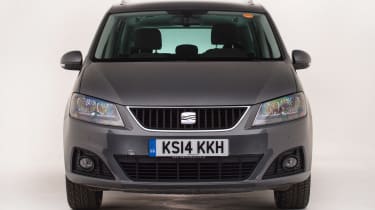 The second-generation Alhambra arrived in showrooms in November 2010. Predictably, the focus was on diesel power, with a choice of 138bhp and 168bhp 2.0 TDI engines.

There was a 148bhp 1.4 TSI petrol motor, too. Each engine came with a manual box as standard, with the DSG semi-auto optional; both units featured six gears. In spring 2013, the bigger diesel was tweaked to 175bhp, then in summer 2015 a facelift brought 2.0 TDI engines with either 148bhp or 181bhp.

The 1.4 TSI powerplant was also reintroduced, having been discontinued in 2013. At the same time, improved safety systems and multimedia were introduced, along with LED tail-lights.

All Alhambra diesels come with a Diesel Particular Filter (DPF), so if you don’t cover that many miles, you might be better off with a 1.4 TSI. The DSG transmission isn’t as reliable as the manual alternative, but both gearboxes are great to use. 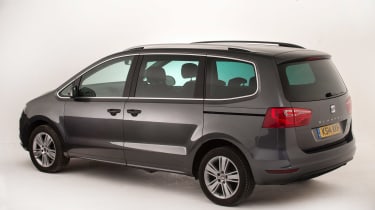 Alternatives to the SEAT Alhambra Mk2

The obvious rival is the Ford Galaxy. As the UK’s best-selling MPV, there are lots on the market, plus it’s great value and practical.

One of the most capable seven-seater MPVs around is the Kia Sedona, which is reliable, very spacious and very affordable. It’s not as good to drive as the Ford, though, and it’s not as versatile, either. The Chrysler Grand Voyager offers stowaway seats, acres of space and practicality galore, but the cabin feels cheap in places and the dynamics aren’t that impressive.

Meanwhile, the Volkswagen Sharan is a rebadged Alhambra that costs a bit more, while if you want to trade a bit of practicality for better dynamics, why not give the surprisingly sporty Ford S-MAX a try?

Some Alhambras come with run-flat rubber. These tend to be more expensive to replace than regular tyres – and they impact on the ride as well. 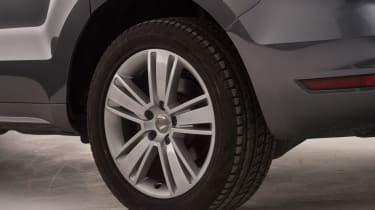 On vehicles with a panoramic roof, check the base of each A-pillar for signs of water leaks. If the mechanism has distorted, it can be costly to fix.

If you’re buying a car without the integrated navigation, used head units can be bought that simply plug in, giving you full functionality.

Rattles from the front end as the car is driven over bumps will probably be the drop links in the suspension. They’re easy to replace.

The Alhambra’s spacious and practical cabin is a great place to spend time. There’s plenty of head and legroom, while sliding doors make it easy to get in and out. Plus, the second and third rows fold flat to reveal a 2,297-litre load bay. This shrinks to only 267 litres with all of the seats in use, though. 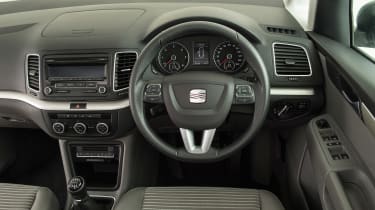 Alhambra owners can choose between fixed or variable maintenance regimes. The former is pegged at 10,000 miles or annually, while the latter allows up to a two-year or 20,000-mile gap. Services alternate between minor and major, costing £159 and £269 respectively.

Both the 1.4 TSI and 2.0 TDI have a cambelt, which should be changed every five years or 60,000 miles; you’ll pay £329 to have this work done on a petrol car or £399 on a diesel. The brake fluid needs to be renewed every two years, at £49, and at the same time the air-con should be serviced, for £69. Book your service online with a SEAT dealer, and you’ll get free European roadside assistance.

While the original Alhambra was affected by five recalls, the Mk2 hasn’t been recalled yet. With only one campaign issued by SEAT each year on average, owners have little to worry about when it comes to their cars’ safety. 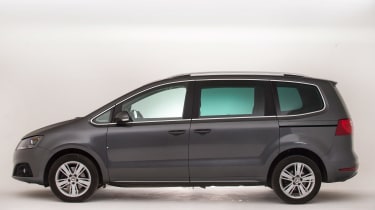 Since this Alhambra was launched in 2010, SEAT’s issued just five recalls, one aimed at the Altea, one at the Mii and three at the Ibiza. Two were because of potential airbag issues, two were due to the possibility of fuel leaks, while the fifth was over bonnet-latching glitches.

The SEAT Alhambra hasn’t charted in Driver Power for the past three years, as the popularity of MPVs has waned. However, other SEAT models have been rated highly for a generous kit list on base models and low running costs. Build quality could be an issue in the longer term, though.