Stylish seven-seater is a superb all-rounder 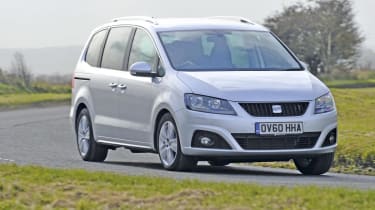 If you’ve got a large family or regularly carry passengers and lots of luggage, the Alhambra makes so much sense. With its sliding doors and enormous, flexible cabin, it offers supreme practicality on top of a refined ride, impressive handling and a range of frugal engines – the best of which is this brilliant diesel. It’s not  particularly cheap, but it’s a superb all-round choice.

It's a Volkswagen Sharan with added SEAT spice and a lower price – so is the new Alhambra a top contender in the MPV market? We tried a 138bhp diesel model to find out.
The 2.0-litre TDI engine impresses from the word go. It delivers 320Nm of torque at only 1,750rpm to make the seven-seater feel punchy, and give 0-62mph in 10.9 seconds.
Video: watch CarBuyer's video review of the SEAT Alhambra
[[{"type":"media","view_mode":"content_narrow","fid":"68682","attributes":{"alt":"","class":"media-image"}}]]
All models feature stop-start and brake energy regeneration, so wear the Ecomotive badge, but our test car – fitted with a six-speed manual gearbox – is the only one to carry the even greener E Ecomotive tag. That’s because it emits 146g/km of CO2 and returns 50.4mpg combined economy. Yet that’s not to say the Alhambra feels like an eco model. The steering is well weighted, the ride comfortable and there’s very little body roll through corners.

Along with the Sharan, this is the widest people carrier on the road, measuring 1.9 metres from wing mirror to wing mirror, and that means there’s plenty of space inside. The first two rows of seats are comfortable for adults, although the rearmost ones are a bit of a squeeze.
The good news is that the car is a fantastic load carrier. Fold the third row of seats, and there’s 1,167 litres of space; this rises to 2,297 litres with the second row down. Even the front passenger seat folds flat to allow items up to 2.95m long to be carried.
On top of all that, there are twin-sliding rear doors, plus the tailgate opens and closes at the touch of a button.
Standard equipment also impresses. Our SE model isn’t quite top of the range, but it still gets cruise control, automatic air-con, integrated sun blinds, 17-inch alloys and auto lights and wipers. SE Lux adds heated front seats, sat-nav, leather and a panoramic sunroof.
While pricing has yet to be announced, our 2.0-litre TDI SE is expected to cost around £25,000 – not cheap, but around £1,300 less than a similarly equipped Sharan.
Rival: Peugeot 5008 Spacious cabin and frugal, punchy engines mark out 5008. Soft set-up gives a smooth ride, but at the expense of handling. Its sub-£17,000 starting price is very competitive, though.
Share this on TwitterShare this on FacebookEmail