Mild facelift is not enough to fend off younger rivals 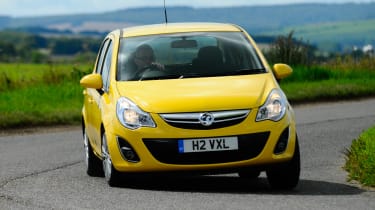 6
The Vauxhall Corsa has been a constant presence in the UK best-sellers’ chart, and a facelift earlier this year improved its prospects.
A new grille and headlamps are the most obvious changes. They bring the supermini into line with its larger stablemates, and oversized badges and alloy wheels also help it stand out. Despite the changes, though, the Corsa isn’t as modern as its rivals. Even the slightly older Clio looks fresher.
The centre console is less dated. The dashboard is finished in an attractive silver material and the piano black trim around the air vents adds a premium feel. However, if visual appeal is one thing, tactile quality is another matter. Cheap switchgear and hard plastics dominate the rest of the cabin. Even the optional touchscreen sat-nav in our test car is flawed. It looks great, but the screen is positioned too low on the centre console and its buttons are very small.
And while the Kia features a leather-wrapped steering wheel, the Vauxhall’s rim is made from unappealing plastic – a finish shared with the gearlever.
At least there’s no shortfall when it comes to space. Rear headroom is generous and legroom is competitive, although it’s not as big in the back as the Rio. In reality, there’s little to choose between the other three contenders, and the Vauxhall’s boot is decent.
Checking the specification panel reveals the Corsa to be the most efficient and frugal of the cars on test. However, the promise of 53mpg-plus on the combined cycle does put a dent in the car’s performance. It was particularly disappointing against the clock – the 50-70mph drag in top gear took a lethargic 21.8 seconds.
Hit the road, and the 1.2-litre unit struggles for pace, and is frustrating to drive at high cruising speeds. Even a gentle motorway incline requires at least one downshift if you intend to keep up with traffic. To make matters worse, the five-speed box is notchy. The trade-off for the lack of pace is a test-leading CO2 output of 124g/km and, if you do drive with economy in mind, we’re sure you can better our poor fuel return of 36.6mpg. Keeping up with its faster rivals in this test clearly had an impact on its returns.
A lack of feel from the steering and brakes leaves you feeling remote from the action on B-roads, and there’s pronounced body roll in tight corners. Still, the steering is light and responsive, and the ride is more supple and forgiving than the Renault’s. It’s fine around town, but for a car that clearly has younger drivers in its sights, we’re disappointed to see stability control remains a £465 option.
It all results in a lacklustre package. In this company, it’s hard to recommend the Corsa.

Chart position: 4WHY: Recently updated Vauxhall now looks better than ever, while 1.2-litre engine promises to be the most efficient here.