With its sharp looks and strong performance, latest Korean promises to shake up the market 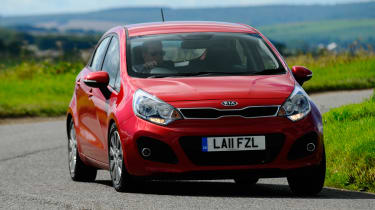 8
Kia is riding the crest of a wave, surfing the success of the brilliant Sportage crossover and Picanto city car. And bosses expect their latest addition to continue the trend.
The new Rio should certainly be a huge improvement over its predecessor, in terms of cabin quality, dynamics, design and space. But the true measure of how far the brand has come will be how well the supermini measures up against its rivals.
Video: watch CarBuyer's video review of the Kia Rio
[[{"type":"media","view_mode":"content_narrow","fid":"68694","attributes":{"alt":"","class":"media-image"}}]]
First impressions are very good. Although the modern and distinctive exterior isn’t quite as exciting as the flashy Ford, the Rio continues the stylish trend established by its Cee’d, Sportage and Picanto stablemates.
Oversized headlamps and deep air intakes frame the nose, but it’s the rear that proves to be this car’s best angle. A shallow back window, broad shoulders and chunky lights ensure it has the look of a coupe rather than a sensible supermini. We think it runs the Fiesta a close second in terms of style, and has the Renault Clio and Vauxhall Corsa licked for kerb appeal.
The interior is even more impressive. As the Kia has the longest body here, it feels by far the most spacious of the group. Sit in the back, and legroom rivals compact family cars. The flat transmission tunnel heightens this impression.
From the driver’s seat, the cabin is bright and airy, while all of the major controls are logically placed. And it’s not only the positioning of the controls that strikes you – the switches all operate with the kind of slick precision we’ve come to expect from the likes of Ford and Volkswagen. The rotary dials and toggle switches for the air-conditioning are a particular highlight.
Mid-range 2 trim brings a generous haul of standard kit, including Bluetooth, an iPod connection and electronic stability control. But the Rio also gets the fundamentals right. There’s plenty of support from the well finished seats, and a wide degree of adjustment for the driving position.
Material quality is arguably the best in our line-up, with soft-touch plastics and grained textures used throughout. Boot space isn’t class-leading, but there’s little between our contenders here, so we don’t
have much to criticise inside.
So far, so good, but will the Kia be able to match its rivals on the road? On paper, it has the necessary hardware to compete. The Rio’s six-speed gearbox is unique in this company, and it’s the most refined cruiser, even though its 1.4-litre engine demands 300rpm more than the excellent Clio to maintain a constant 70mph.
Well spaced ratios make for keen acceleration, and the Korean machine eclipsed its rivals during our in-gear tests. The smooth petrol engine’s linear power delivery means it builds speed efficiently. It’s not quite  as punchy as the turbo Clio, and our low-mileage car felt tight, but the figures show it promises the liveliest performance of our quartet.
The Rio’s impressive start only begins to falter when you head away from the test track. There’s nothing wrong with the tidy handling, as body roll is well contained and the chassis remains balanced in bends. Unfortunately, the electric power-steering set-up is incredibly light. It’s fine around town, yet lacks precision and feel at higher speeds. However, our biggest criticism is reserved for ride quality – an area where the Ford Fiesta still reigns supreme.
There’s nothing untoward on smooth surfaces, but the Kia’s composure is troubled by big bumps and the ever-present potholes on UK roads. It struggles to cope with coarse surfaces, too, so raised junctions are greeted with bouncy body movements and you can hear the suspension thumping over smaller imperfections. Still, it’s an irritation rather than a fatal flaw.
The Rio should fare better at the pumps. Officially, it claims to travel 486 miles between refills of its small 43-litre tank, but we hit only 324 miles at an average of 34.3mpg.
In its defence, our test car arrived with only a few hundred miles on the clock, and we would expect this figure to improve as its mileage increases. Plus, there’s no arguing with CO2 emissions of 128g/km, which
are par for the course here.
So, the new Rio matches or betters rivals in many areas, and has announced itself as a serious contender in the supermini sector. But will its high-quality interior and stylish looks be enough to take class honours?

Chart position: 2WHY: Smart styling represents a fresh approach. Does the Rio pick up where successful Cee’d, Sportage and Picanto left off?