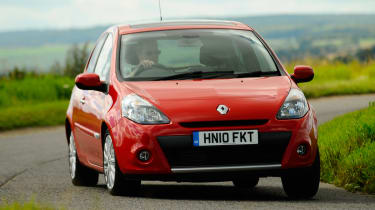 6
As with its Vauxhall and Ford rivals, the Clio has a healthy following in the UK. And while Papa and Nicole have long gone, Renault still believes its supermini has what is required to dominate the sector.
With its bright red paint, our Clio was still capable of attracting attention. Dynamique TomTom spec provides silver exterior trim and smart 16-inch alloys. However, parked next to the sleek Fiesta and bold Rio, the once-daring design has lost some of its sparkle.
The same is true of the interior. We have no complaints about the amount of space, as it’s broadly on a par with that of the Fiesta and Corsa, and the level of standard kit is impressive, too. The cabin is full of useful features, with Bluetooth, cruise control and a great TomTom sat-nav. Yet the overall design and quality of the fixtures and fittings inside lag behind the competition. The soft-touch dashboard used to be unusual in the sector, but first the Fiesta and now the Kia have raised the stakes considerably.
While the looks and interior fail to set the benchmark, the turbocharged 1.2-litre petrol engine is a gem. Not only does it provide sparkling performance, impressive acceleration and in-gear flexibility, but it does so with real vigour. Where the Corsa feels strained at the top of its rev range, the Renault has a sporty exhaust note and an appetite for revs. It’s matched by the Rio against the clock, but on the road it feels the quickest of our quartet.
Even the absence of a sixth gear fails to dent the Clio’s refinement, and its tall fifth ratio demands only 2,700rpm from the engine at 70mph. If there’s any criticism to be levelled at the drivetrain, it’s that the gearchange can be notchy if you try to rush your shifts.
An occasionally harsh ride isn’t enough to blot the car’s copybook, either, even if it is an unexpected trait from the French manufacturer. In fact, the chassis has the same eager character as the engine. There is plenty of grip in corners and body roll is well controlled. We would prefer more feedback through the steering, but the Renault isn’t alone in this respect and its brakes are progressive.
Remarkably, given its pace, the Clio also proved to be the most frugal model on our test. It recorded 41.8mpg, which left all of its rivals in the shade. This is down to the torquey nature of the engine, as we didn’t need to work it as hard to keep pace with the other cars.
So despite its age, the Renault puts in an excellent showing. It’s no longer a trendsetter in the supermini sector, but its high standard specification and low running costs hold plenty of appeal. Factor in one of the best small engines around, and there’s life in the Clio yet.

Chart position: 3WHY: The only turbo model in our line-up is a lively performer. It’s also well equipped and promises polished driving dynamics.