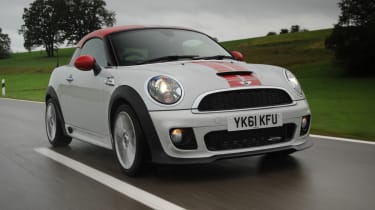 6
Wind the clock back 42 years to the launch of the original Mini, and even the most fervent fan of the car wouldn’t have envisaged the global success it now enjoys. With five separate derivatives, and a model line-up that stretches to 51 versions, the maker knows no limits.
Recent additions, such as the five-door Countryman, have stretched the original Mini brief to breaking point, but the new Coupé is much closer to the historical heartland of the brand. Small dimensions and pin-sharp handling form the building blocks of its motoring DNA.
Advertisement - Article continues below
From the front, it’s hard to distinguish the Coupe from the hatch. But with the windscreen pillars tilted to 13 degrees, it is actually 29mm lower than its supermini stablemate. The so-called ‘helmet design’ roof is unique, although it can’t match the elegance of the Peugeot’s double bubble. An active wing rises from the flat rear deck at speeds above 50mph, but the racy newcomer looks as though it’s moving even when stationary.
The usual array of personal touches includes a contrasting roof, standard full-length stripes and, in the case of the top-of-the-range JCW tested, twin exhaust tailpipes and large alloy wheels.
MINI fans will be pleased to see that the cabin retains the mix of impressive build quality and retro-inspired details we’ve grown accustomed to. In fact, with the oversized speedo, rollerball air vents and curved dash, the interior is almost identical to the hatchback’s.
Advertisement
Advertisement - Article continues below
Despite its lower profile, the familiar low-slung driving position combines with cut-outs in the rooflining so there’s plenty of headroom. And aside from the poor rear visibility through its narrow back window, the driving position is hard to fault.
Advertisement - Article continues below
Look over your shoulder in a MINI hatch, and you’ll see a pair of cramped rear seats, but not in the Coupe. Designers have done away with the rear bench, and this pays dividends further back, where there’s a very useful 280-litre luggage area.
While this isn’t as big as the RCZ’s boot space, it’s 20 litres up on the Clubman. And, compared to some two-seat sports cars, the new MINI is pretty practical. A load-through hatch is also standard across the range.
Luggage space is all very well, but the new Coupé JCW is billed as the fastest and most driver-focused car the firm has ever produced, so it’s the experience behind the wheel that counts.
Work to enhance the overall rigidity has seen a slight shift forward in weight distribution compared to the hatch. Combined with a lower centre of gravity, and aided by revised damper and spring rates, this has improved traction and sharpened responses.
In truth, you’d need to drive the hatch and Coupé back-to-back to tell the difference. However, from the moment you set off, the newcomer feels alive and agile in a way only a MINI can. The weighty steering is positive and oozes feedback, and if you press the Sport button, it gets heavier still.
Advertisement - Article continues below
Advertisement
Advertisement - Article continues below
The Coupé darts into corners with more verve than the RCZ, and the short wheelbase makes for a feisty relationship between front and rear grip. Existing MINI drivers will be familiar with the way you can adjust the angle of the car mid-corner using the throttle.
Body control is first rate, while excellent brakes, a snappy gearshift and positive throttle response round off its polished dynamics. The JCW comes with an electronic differential lock as standard. Yet on the streaming wet roads of our test, it still squirmed around under power, triggering the traction control as it searched for grip on the exit of tight hairpins. But with 208bhp and up to 280Nm of torque, the newcomer has a lot of power
to transmit to the tarmac.
The Coupé is 256kg lighter than the RCZ, and the smaller MINI feels more responsive than its rival. Unfortunately, the wet conditions of our test didn’t allow us to record representative performance figures. Although there’s not a big gulf between the two, the newcomer just edges its rival for straight-line pace.
Stiffer sports suspension is a £150 option on the JCW, but comes as a free upgrade in conjunction with the Chili Pack fitted to our car. While it’s fine on smooth European tarmac, the rigid set-up delivers a firm ride on bumpy roads.
The Peugeot is certainly the more relaxing choice, but if you’re after an eye-catching coupé that can rival the best hot hatches for feisty fun, look no further.

Chart position: 2WHY: Smaller and faster than any of its modern predecessors, the JCW Coupe promises to up the fun factor. Is this a MINI too far, or has the brand hit the jackpot?