Coupe delivers on promise of its looks 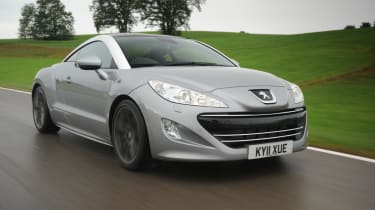 6
The next time someone tells you that all modern cars look the same, point them in the direction of the Peugeot RCZ. Its double-bubble roof is unique, and the distinctive styling has been an unqualified success.
The firm has sold 30,000 examples of the coupe in over 80 countries, so if MINI wanted proof that adventurous design pays off, the RCZ is exactly that. Parked next to the new Brit, the Peugeot is taller and wider – a result of underpinnings shared with cars such as the 308 hatch and 3008 crossover. It also has a long wheelbase for a coupé, so it looks big alongside the MINI.
Advertisement - Article continues below
Video: watch CarBuyer's video review of the Peugeot RCZ
[[{"type":"media","view_mode":"content_narrow","fid":"68808","attributes":{"alt":"","class":"media-image"}}]]
Inside, it’s more traditional Peugeot territory. While interior quality is good, the RCZ doesn’t feel as robustly put together as the MINI, and if you delve into out-of-the-way places, you’ll find a few cheaper materials.
The upper section of the dash is smart, and while there’s none of the MINI’s chic retro-inspired detailing, a pair of large circular air vents flank an analogue clock in the centre of the dash.
As with its rival, there’s a decent range of driving position adjustment, while low-slung seats provide a traditional coupé feel. Better rear visibility, plus a more grown-up and spacious feel, are key advantages over its rival.
However, the Peugeot’s trump card is its 2+2 layout. The upright rear seats are tiny, but they offer an extra dose of flexibility. And when they’re not being used, they fold flat, increasing boot space from 309 to 639 litres.
Advertisement
Advertisement - Article continues below
Even with them in place, the RCZ provides 29 litres more capacity than the MINI. Top-of-the-range GT models come well equipped, too. Leather upholstery, heated front seats and front parking sensors help to negate its price premium over the Coupé. And a choice of windscreen pillar finishes gives scope for personalisation.
Advertisement - Article continues below
Under the bonnet, our two contenders share the same co-developed 1.6-litre direct-injection turbo engine. There are some key differences, though. The unit produces 8bhp less power in the Peugeot, and the RCZ is 256kg heavier than the smaller MINI.
The engines share the same essential characteristics, though, with plenty of punch and a rasping soundtrack once the revs rise above 4,500rpm. Better still, the precise and short-throw six-speed gearshift is the best we’ve experienced from a Peugeot in a long time. This is isn’t the only area where the French firm has worked hard to provide driver appeal. The THP 200’s front suspension incorporates an additional lower bracing bar and wider-diameter hubs to improve its handling. As a result, the driving experience is notably sharper than in lesser models.
The RCZ isn’t as agile or lively as the JCW, but it’s still the best-handling Peugeot we’ve driven for years. Body control, front-end grip and stability are all excellent. We’ll have to drive the MINI in the UK to be sure, but the Peugeot’s more forgiving suspension should give it the edge here. However, its huge 19-inch alloys compromise the ride at low speeds.
That aside, the RCZ has the desirability and driver enjoyment to challenge the new MINI.

Chart position: 1WHY: It’s stylish, thrilling to drive and powered by the same turbocharged engine as the MINI. The RCZ has been a big hit, and it won’t be an easy car to beat.