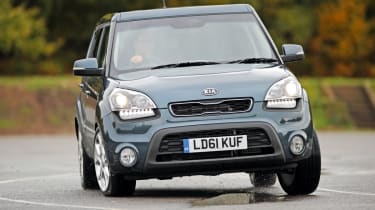 8
The Kia Soul has always stood out and the latest round of revisions make it even more eye-catching. It has retained the company’s bow-tie grille, but new LED daytime running lamps now sit below the redesigned headlights and the front bumper has been tweaked, too.
The result is more distinctive than before, although it’s unlikely to rival the Juke in the battle to turn heads. And while you won’t spot it without a tape measure, the revised car is wider and longer to accommodate new powertrains, which include a direct-injection 138bhp 1.6-litre petrol unit.
Video: watch CarBuyer's video review of the Kia Soul
[[{"type":"media","view_mode":"content_narrow","fid":"68385","attributes":{"alt":"","class":"media-image"}}]]
Climb aboard and the Soul’s cabin feels more grown-up and better built than the Juke’s. The simplicity of its layout contrasts starkly with the Nissan’s busy interior, while its chunky switchgear looks great and has a feeling of solidity and precision that’s missing from its rival.
Throw in clear instruments, a classy rubberised finish on the door pulls and a smart-looking stereo, and you could be forgiven for thinking you were sitting in something much more expensive. Getting comfortable is easy thanks to the wide range of seat and wheel adjustment. However, some of our testers noticed that the unforgiving seat backrests were too firm on longer journeys.
The tartan fabric is likely to divide opinion, but there can be no argument about the amount of space on offer. The standard glass sunroof on the Hunter model adds to that impression. There’s more room in the back of the Kia than in the Nissan and its high-set front seats allow rear passengers to slot their feet beneath them.
Although the cabin benefits from generous storage space, it’s the boot that rams home the Soul’s practicality advantage over the Juke. Both cars feature under-floor storage, but the Kia’s 340-litre boot is 89 litres bigger with the seats in place. Only the flimsy load cover lets it down.
On the move, you will quickly notice this car’s other flaw: its firm ride. The 18-inch alloy wheels look great, but combined with stiff suspension, they make the Soul crash over any rough road surfaces. This is particularly problematic when tackling potholes, which sends shockwaves through the cabin.
The pay-off for the firm ride is decent body control – the Soul resists roll through bends much more effectively than the Juke. It’s not as communicative as the Nissan, with heavier steering and limited feedback, but aside from the harsh ride, we have few dynamic complaints. The 1.6-litre diesel gets noisy when thrashed, but this is down to a lack of sound deadening, and the Kia is the more refined choice at cruising speeds.
Our test car was fitted with an optional six-speed auto (£1,100). Replacing the old model’s four-speeder, it helps performance, as the Soul sprinted from 0-60mph in 10.7 seconds. Auto gearchanges are smooth and fast, and nudging the lever across to the separate manual gate gives you control; push it forwards to change up and backwards to shift down.
In our braking tests, the Soul emerged as the clear winner. The Juke dives so much under hard braking that the rear end becomes light, and unlike the Soul, it squirms around during emergency manoeuvres.
As our test car was an auto, our fuel economy was a good bit off the figure achieved by the manual Juke. Emissions suffer dramatically if you choose the automatic option on the Kia; it emits 151g/km of CO2, while manual cars produce only 129g/km. This has a similar effect on economy and in our hands the Soul returned a dismal 24.7mpg. This includes our performance testing, but if you stick with the manual, you should be able to get closer to the Nissan’s return of 45.1mpg – if the official figures are anything to go by, as it matches the Juke on paper.
Take the automatic gearbox out of the equation and the Soul is a convincing Juke rival. Not only does it look good, drive well and pack in plenty of standard kit, but it also offers Kia’s renowned seven-year warranty.
The manual model has identical CO2 emissions and official fuel economy figures to the Juke, so the Nissan has a fight on its hands to avoid finishing second here.

Chart position: 1WHY: Don’t write the stylish Soul off as a fashion statement. A seven-year warranty and frugal diesel ensure it makes sense.