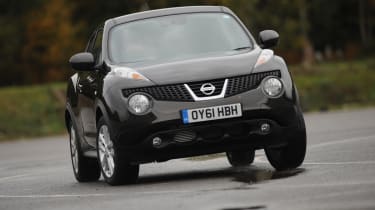 8
When it was launched last year, the Nissan Juke shocked the car-buying public, but has familiarity now softened the blow of its striking looks?
Style is subjective, but the Juke is the more challenging choice here. Its extreme curves and sculpted lights owe more to a sports car than a supermini, while the raised body is clearly meant to give the car the look of a baby off-roader.
Video: watch CarBuyer's video review of the Nissan Juke
[[{"type":"media","view_mode":"content_narrow","fid":"68587","attributes":{"alt":"","class":"media-image"}}]]
It’s a different story behind the wheel, though. A pair of deeply recessed dials sit under a floating cowling, while the painted transmission tunnel has been inspired by the petrol tank of a high-performance motorbike.
At first glance, the Juke has the more stylish interior, especially with the piano-black trim fitted to our test car, but where the Kia has quality soft-touch plastics, the Nissan makes do with hard, scratchy textures that feel cheap.
The Juke offers a better driving position, though, as its low-slung driver’s seat feels more car-like than the upright one in the Kia. The seats are more supportive, too, but the wheel only adjusts for height. This is disappointing for such a new model, especially when hi-tech kit such as sat-nav and climate control are standard.
They’re grouped together in the middle of the dash, and the climate control switches also operate Nissan’s Dynamic Control System – you can choose between the three available set-ups (Normal, Eco and Sport) at the touch of a button.
In the back, the Juke is not as impressive as the Soul. Rear passengers have less head and legroom than in the Kia and the tiny back doors make it harder for them to get in and out.
The Nissan’s 1.5-litre diesel isn’t as refined as its rival’s 1.6-litre engine. The low-speed clatter subsides once you get moving and it smooths out acceptably at higher speeds.
It provides decent power and performance, but the lower overall gearing means it’s louder than the Kia at motorway cruising speeds.
By far the worst part of the drivetrain is the six-speed gearbox. It’s far too notchy to encourage keen drivers to tap into the performance on offer.
Even if you make a conscious effort to reduce the speed of your shifts, you can still sense resistance through the lever as you engage the next gear.
The Nissan does a better job dynamically. There’s more body roll than in the Soul, but you get more feedback from its controls than the Kia’s.
Drivers who want the ease of automatic transmission have to look elsewhere, as diesel versions of the Juke can only be specified with a manual box.
Our test car did put in an excellent performance at the pumps. It returned fuel economy of 45.1mpg over the course of our test, which isn’t far off the 57.6mpg quoted officially. As with the manual Soul, its CO2 emissions stand at 129g/km, so a year’s road tax costs £95.
In many respects, these cars are very similar, but in others, they’re worlds apart. The question is, does the Juke do enough to come out on top?

Chart position: 2WHY: Nissan’s radically styled mini crossover has turned the class on its head since it was launched in September last year.