Can the revised Kia Soul beat the Nissan Juke's mix of head-turning looks and supermini practicality? 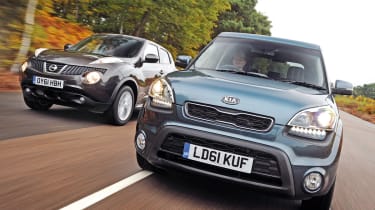 Superminis come in all shapes and sizes, but some versions also feature a hefty dollop of style. If you want to make a bold fashion statement, the Nissan Juke is the obvious solution, but Kia is aiming to turn heads back in its direction with the arrival of the revised Soul.

Here we test the 1.6-litre CRDi diesel. Its power output hasn’t changed, but a range of electronic tweaks has made it quicker and more efficient than before.

The Kia won’t have everything its own way, though, as Nissan has made a habit of turning established class boundaries on their head. After the red-hot success of the Qashqai crossover, it has tried to do the same thing to the supermini class with the Juke.

The tall-riding five-door hatch blends the proportions of a small 4x4 with the low running costs and dimensions of supermini. Throw in some controversial styling and a healthy kit list, and the British-built Juke is sure to give the new-look Soul a run for its style-conscious money.

There’s only a few hundred pounds separating our duo on price, so which will emerge from the urban jungle  as the winner of this test?

Superminis don’t come any more eye-catching than these two cars, but even the most fashion-conscious buyer will want to delve deeper than that to choose between them. And when you dig out a calculator, the Soul comes up trumps.

The manual Kia promises lower running costs and costs £700 less to buy than the Juke. Plus, its cabin is more spacious and better built, and its engine more refined and flexible. The updated styling and seven-year warranty add gloss to an already attractive package. So the Juke has to settle for second place.

Despite enjoying luxuries like sat-nav and Nissan’s Dynamic Control System, it simply doesn’t measure up to its rival. Not only is it smaller, it lacks the quality feel of the Kia and it’s not as reassuring behind the wheel, either. The opinion-splitting looks and long kit list are the only things counting in its favour.

The Soul impressed us from day one, and this latest round of tweaks has succeeded in broadening its appeal. As well as looking sharper than the Juke, it’s more spacious, better equipped and more fun to drive. A seven-year manufacturer warranty and lower price mean it makes financial sense, too.

Standard sat-nav and adaptable driving dynamics make the Juke attractive on paper. Its styling is another matter. Yet regardless of specification and looks, the Nissan trails due to its fussy cabin, limited space and low-quality feel. The gruff engine and high price seal its fate.

Update: The Kia Soul is no longer available in special-edition Hunter trim.