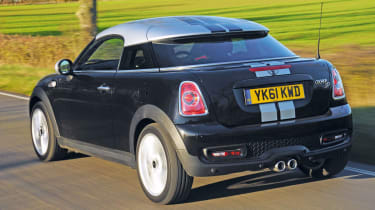 The Coupe is the sixth model to join the MINI family, and is being heralded as the most driver focused yet. The simple two-seater layout is key, as it’s designed to deliver an even sharper drive.

The flagship John Cooper Works edition was narrowly beaten by the Peugeot RCZ, but this potent diesel model should provide a much sterner test for our reigning class champion, as it promises to deliver strong economy and searing pace, along with MINI’s trademark handling prowess.

From the outside, it’s clear that the Coupe is for people who want to get noticed. The bold racing stripes, prominent air scoop and ‘helmet’-style floating roof all demand your attention, and make the understated C30 and futuristic CR-Z look like shrinking violets.

The rest of the design will be instantly familiar to MINI fans, but the addition of a speed-sensitive pop-up rear spoiler and a 29mm lower roofline gives the Coupe a more purposeful, road-hugging stance.

While it’s definitely the most extrovert car here, we’re not entirely convinced by the MINI’s unusual styling. It lacks the balanced proportions and distinctive lines of the Peugeot, although we prefer the black and silver colour scheme of our Cooper SD test car to the more garish red and white finish of the JCW version tested previously.

Our diesel model came with the optional Chili pack, which adds xenon headlights, 17-inch alloys, extra chrome trim and front foglamps. It also brings interior goodies like climate control, part-leather seats and a multifunction steering wheel – although the package hikes the price by £1,865.

Inside, the combination of the lowered roof, black headlining and miniscule rear window means the car feels a little cramped, especially compared to the much roomier Volvo. But the headlining has been cleverly hollowed out to accommodate taller drivers. The dash layout has been carried over virtually unchanged from other MINIs, with the oversized speedo, circular air vents and metal toggle switches all present and correct. Build quality is superb, with the surfaces and switchgear feeling reassuringly robust. It all makes the Honda seem especially low-rent.

By removing the rear seats, MINI has drastically improved the car’s luggage capacity. In fact, the Coupe’s 280-litre boot is bigger than the Clubman estate’s. The trouble is, the compact dimensions mean the car still trails the RCZ and C30 for space; this isn’t a car for you if you carry more than one friend.

Still, the Coupe is by far the most driver-focused car in the test – and at the test track, this was really brought home to us. The Cooper SD uses a punchy 2.0-litre BMW engine with 141bhp and 305Nm of torque, and it blitzed every other car for performance, topping all the in-gear and sprint times.

A low centre of gravity, ultra-stiff suspension and weighty-but-lively steering mean the MINI feels the most at home on the track – where the taut body control and masses of grip make it easy to exploit all the power.

There’s a high price to be paid for the MINI’s speed, though, as this manic character makes it a real handful on public roads. The steering wheel constantly pulls and fidgets as the front wheels hunt out cambers in the tarmac, and the punishing ride and short wheelbase mean it can feel quite unstable over potholed surfaces. The engine sounds rougher than the Peugeot’s; only a tall sixth gear helps it settle at cruising speeds.

So this isn’t a car for covering long distances, and the lack of composure stops you enjoying the MINI’s dynamics. But it’s great fun in small doses – and when you look at how little it costs to run, it should still be a strong contender.

Chart position: 2WHY: Latest addition to the MINI range is far more than a marketing ploy – it’s a genuine contender. We test the diesel for the first time.