New diesel MINI Coupe mixes striking looks with low costs. Can it see off a trio of stylish rivals? 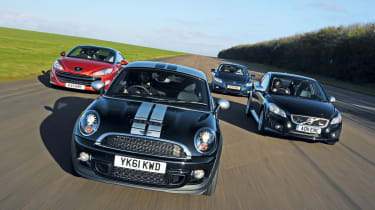 MINI is on a roll. Hot on the heels of the opinion-splitting (but strong-selling) Countryman crossover comes a car that has driving fans in its sights. The MINI Coupe mixes all the retro charm we’ve come to expect from MINI with an extra dose of driver appeal and a bold look.

The petrol flagship has already impressed, but now we’ve got the keys to the Cooper SD version. It comes with the promise of hot hatch performance and ultra-efficient diesel economy, but the good news for style-conscious coupe fans is it isn’t the only choice...

Snapping at the MINI’s heels is the Peugeot RCZ. It was named Best Coupe at our New Car Awards 2011, and while it’s not cheap, the RCZ is a class act and the 2.0 HDi model has the most power here.

Next up is Volvo’s C30. The stylish three-door hatchback  has a characterful five-cylinder diesel engine and practical four- seat cabin – but will it have the dynamic appeal and efficiency  to rival the best cars in the class?

Diesel engines aren’t the  only solution if you want  strong fuel economy – our  final contender has a hi-tech  trick up its sleeve. The Honda CR-Z is a unique proposition  in the coupe class thanks  to its petrol-electric hybrid powertrain.

Each of these cars offers a unique combination of talents, but it didn’t take us long to settle on our winner. The Peugeot RCZ has ruled the coupé roost since it arrived in 2010 and the new MINI Coupe simply doesn’t do enough to change that.

The Cooper SD has a lot going for it, but its in-your-face looks and frenetic chassis are acquired tastes. In the end, the controversial styling and harsh ride cost it dearly, as we think the Peugeot is a more appealing proposition in the long term.

The RCZ gets attention without resorting to garish stripes, and its more grown-up handling provides just as much excitement as the MINI, yet with fewer compromises for comfort and refinement on longer trips. Both cars finish comfortably ahead of the Volvo and Honda – although choosing between these two isn’t easy.

We think the C30 edges out its hybrid rival because, for all its talents, the CR-Z is simply too slow. Extra performance and sharper handling would transform the Honda, but for now, the faster and more practical Volvo finishes in a hard-fought third place.

Another victory for the RCZ. As style statements go, the Peugeot is a real winner, while the grippy chassis and punchy HDi diesel engine give it great substance.

The MINI is exciting to drive, but can’t match the mature RCZ on the road. Still, the Coupe impresses elsewhere with low running costs and class-leading fuel economy.

If you want space and style, the Volvo is the only solution here. Even if you don’t need the extra seats, its gruff soundtrack and strong pace are sure to appeal.

We love its compact shape and slick gearshift, but the CR-Z trails on power and economy. If only the distinctive coupe was offered with Honda’s brilliant i-DTEC diesel.