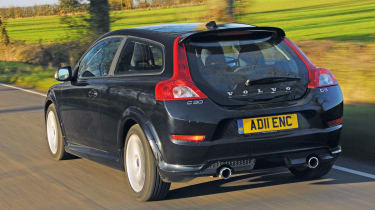 Whether you think the Volvo C30 is a three-door hatch or a coupe, one thing’s for sure: if you want a fashionable small car, it should be on your list. And if looks are important, R-Design trim is the one to go for.

This specification includes a purposeful bodykit and larger alloys, while lowered sports suspension gives the car a more athletic stance than the SE and SE Lux models. It does the trick, too, as the C30 stands up well against its rivals, despite being a much older design. A diffuser-style rear bumper and small spoiler above the rear windscreen also ensure it has all the go-faster essentials on the outside.

The Volvo doesn’t really show its age inside, either. The floating centre console is crowded with buttons, but it looks smart and doesn’t take long to get used to. The rear seats are an added bonus, as this is the only model here capable of carrying four adults. If you need everyday practicality, the C30 is at a huge advantage in this test.

Boot space has never been one of the Volvo’s strong points, though. Not only does it trail the Peugeot and MINI on capacity, with only 233 litres of space, it’s also hampered by a small opening and a fiddly load cover. Still, you can fold the individual rear seats forwards to accommodate larger items.

Driving characteristics will be more important than practicality to buyers in this market, so can the old timer keep pace with its younger rivals on the road?

If all you’re worried about is straight-line speed, then the answer is yes. The Volvo’s five- cylinder diesel engine is second only to the Peugeot’s when it comes to horsepower, delivering 148bhp, and its 320Nm torque output is higher than any rival’s, so the punchy performance should come as no surprise.

The C30 sprinted from 0-60mph in exactly the same 8.2 seconds as the MINI and RCZ. Its diesel rivals proved marginally quicker during all of our in-gear acceleration runs, yet the Volvo doesn’t want for overtaking pace – the differences are tiny and the way the 2.0-litre engine surges to its red line gives the car a racy character.

The gruff soundtrack adds to this impression, so it’s a shame that it isn’t matched by sporty steering. The oversized wheel is at odds with the R-Design performance trimmings and there’s no feedback either. But worst of all, the Volvo lacks its rivals’ precision.

The rest of the driving experience is much better, though, as the lowered R-Design suspension makes the C30 more forgiving than the unyielding MINI and firm RCZ. Small ruts and potholes still thud through the cabin when you’re trundling along at urban speeds, but once you reach motorway pace the C30 is surprisingly supple.

The drawbacks of this are greater body roll in corners and more pronounced dive under heavy braking. It’s still capable and fast, but the Volvo doesn’t offer the alert responses, agile handling or driver engagement of the MINI and Peugeot.

The negatives don’t end there because the C30 also proved to be the thirstiest choice. Plus, its age clearly affects resale values: it has the lowest predictions here.

The Volvo is a very likeable car, but it only beats its main rivals here for practicality. In a test of sporty coupes, that isn’t going to be enough.

Chart position: 3WHY: The striking C30 is too small to rival genuine family car coupes, but can the R-Design model spring a surprise in this company?