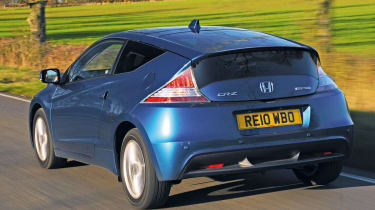 The Honda CR-Z is the odd one out in this line-up thanks to its petrol hybrid powertain, but strong efficiency and purposeful styling make it a close rival to the MINI Coupe SD.

Its futuristic design is in sharp contrast to the flamboyant-looking Peugeot and retro-styled MINI, with plenty of eye-catching details, including a distinctive split-level glass tailgate. There’s surprisingly little to distinguish the top-of-the-range GT from less expensive models in the range, but the low-slung design and compact dimensions give the Honda a suitably racy appearance.

Inside, you sit closer to the ground than in any of the other cars and the standard leather upholstery adds an upmarket feeling. The seats don’t offer enough side support, but the tactile metal gearknob and deep-dished steering wheel are great to hold.

In front of you, the big central speedometer glows different colours according to which of the CR-Z’s three driving modes is selected. But none of this can disguise the interior’s hard plastics or busy layout.

Plus, the tiny rear seats are useless for carrying passengers. Don’t even bother trying to squeeze anyone bigger in the back, because they simply won’t fit. The solution is to leave the seats folded flat to boost the tiny 215-litre boot’s capacity to a more useful 389 litres.

All the coupes on this test struggle with rear visibility, but the CR-Z is the worst offender, as the integrated tailgate spoiler and wide C-pillars create major blindspots. Fortunately, it has standard rear parking sensors, unlike the Volvo.

Take the Honda for a drive and it’s easy to forgive these faults, as the crisp gearbox, high-revving 1.5-litre petrol engine and precise steering make for an extremely involving experience, despite the lack of raw pace. The naturally aspirated engine and electric motor together produce 122bhp and 174Nm of torque, so the hybrid is comprehensively outgunned by its powerful diesel rivals in terms of performance.

It was nearly a second slower than them from 0-60mph, posting a time of 9.1 seconds, and the performance gap was even wider in our in-gear tests. The drag from 50-70mph in fifth gear took 13.9 seconds – that’s nearly five seconds longer than the MINI.

The handling is also a mixed bag. If you throw the CR-Z into a corner with enthusiasm, the softly-sprung suspension and heavy battery pack in the rear mean there’s more body roll than in its rivals.

However, there’s still fun to be had thanks to the accurate steering, lightning-fast gearshift action and willing engine. And if you lift off the throttle sharply mid-way through a corner, the nose tightens its line neatly.

Unfortunately, the CR-Z’s soft suspension set-up doesn’t translate into a silky-smooth ride, and the car struggles to cope with bumps. The engine’s lack of low-down torque also becomes an issue on the motorway, and there’s noticeable wind noise from the wing mirrors at speed.

On paper, the hybrid’s trump card should be economy, but in reality, the Honda struggled to get near the best of its diesel rivals. It narrowly beat the Volvo to third place, returning only 33.2mpg in our hands.

So, despite being a quirky and fun alternative coupe choice, the CR-Z is outclassed in terms of performance and economy.

Chart position: 4WHY: Our joker in the pack has an advanced petrol-electric engine. The CR-Z is a close match for the MINI on price and fuel efficiency.