Has a mid-life revamp done enough to make the stylish supermini a class leader? 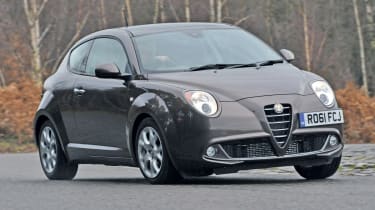 8
The Alfa Romeo MiTo should have been a runaway success in the premium supermini class. With its bold styling, keen engines and sporty badge appeal, the car had all the raw ingredients to shine.
Yet since it first appeared in 2008, the entry-level Alfa has struggled to make an impact. Lacklustre driving dynamics and a cheap-feeling cabin have left it trailing rivals.
Alfa is confident that the recent update will give its baby a fighting chance – even though, apart from subtle trim revisions, the latest MiTo’s looks are unchanged. That means you get an 8C-inspired nose, bulging wheelarches and round tail-lamps. Our Sprint test car also featured 16-inch alloy wheels, a classy titanium finish for the headlight surrounds and eye-catching Metal Bronze metallic paint (a £425 option).
Inside, changes have also been kept to a minimum. There’s a smattering of new colours, but you get the same cowled instruments, circular air vents and silver finish for the centre console. Sadly, the cheap-feeling plastics are
still there, as are the squeaks and rattles. It definitely can’t match the Audi A1’s class-leading build quality and appeal.
The generous amount of standard kit will distract you from the cut-price cabin. Bluetooth, cruise control and an iPod connection are included. Adding the last of those three alone to the A1 will cost £305.
The cabin is roomy – occupants in the back get decent head and legroom, although the small side windows make the rear feel claustrophobic. There are also lots of storage cubbies and a well shaped 270-litre boot.
Under the bonnet is a revised version of the 1.3-litre JTDm diesel. Adding stop-start has resulted in road tax-free CO2 emissions of just 95g/km. Yet with only 85bhp, the Alfa trails its rivals on power. This was highlighted at the track, where the MiTo took 12.8 seconds to cover 0-60mph – 3.2 seconds more than the sprightly Citroen. The stiff shift action of the five-speed manual gearbox didn’t help.
In real-world traffic, the Alfa’s disadvantage is just as obvious – it’s sluggish away from lights and needs more space to overtake slower vehicles. But the engine is smoother and more refined than the Audi’s gruff diesel, plus it returned an excellent 43.6mpg.
As before, the MiTo features Alfa’s DNA system. Operated by a toggle switch on the centre console, it allows you to tailor throttle response and steering. We’ve criticised this set-up in the past, but it seems better suited
to the entry-level diesel than other engines.
In Dynamic mode, the engine responds sharply to the throttle and the steering loses some of its artificial lightness. Yet there’s still very little feedback, and none of the major controls have the same precise
feeling you get in the A1 and DS3.
But it’s the rock-hard ride that really holds the MiTo back. At low speeds it thuds over bumps and crashes into potholes, while it constantly fidgets on the motorway.
This is a huge shame, because there’s a lot to like about the Alfa – not least its price. At £14,450, it undercuts the Citroen by a healthy £2,550. What’s more, like all our contenders, it’s exempt from road tax and the London Congestion Charge. Plus, our experts predict it will enjoy solid 43.9 per cent residual values.
When you factor in the bargain price, head-turning looks and Latin charm, the MiTo could still be in with a shout here.

Chart position: 3WHY: Updated engines and revised trim levels aim to catapult stylish Alfa Romeo to the top of the class.