Which premium supermini offers the best combination of style, pace and efficiency? 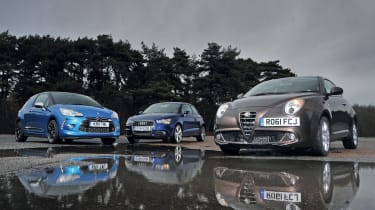 Alfa Romeo is on the attack. Its entry-level MiTo was met by a lukewarm response on its 2008 debut, so the car has been refreshed in a bid to take it to the top of the premium supermini class.
The biggest change is under the bonnet, where you’ll find updated engines, including the 85bhp 1.3-litre JTDm diesel. Emitting less than 100g/km of CO2 and promising nearly 80mpg, this is one of the most efficient engines in the class. But the really good news is the price: in well equipped and sporty Sprint guise, the MiTo costs only £14,450.
Lining up against the Alfa are two of the best premium superminis. The Audi A1 is our class champ, setting standards for quality and desirability. In 1.6 TDI form, it’s as clean and efficient as the MiTo.
Our final contender is the Citroen DS3. Distinctively styled, fun to drive and cheap to run, it represents a stern test for any newcomer.
So does the MiTo finally make a big splash in this sector, or will Alfa be drowning its sorrows after another defeat?

There was no argument among our testers about which car finished last. Despite a recent round of updates, the Alfa Romeo MiTo is still way off the pace in this market.

It’s smartly styled, well equipped and cheap to buy, but it’s also outclassed by the competition in every area. Below-par build quality, imprecise handling and a bone-jarring ride are the biggest complaints, while the 1.3-litre diesel engine delivers only adequate performance.

Separating the Citroen and Audi was a tougher task. The distinctive DS3 is great to drive, plus it has a punchy engine and a roomy cabin. However, it’s held back by its hefty price tag – it costs a whopping £2,680 more than the Alfa.

The A1 isn’t as engaging to drive or good to look at as the DS3, but it’s beautifully built with a high-class cabin. Factor in its great refinement and low running costs, and it takes a narrow yet deserved victory here.

WinnerAudi A1 1.6 TDi Sport ★★★★ The A1 still sets the premium supermini benchmark. It’s not at its best when fitted with the gruff diesel and firm Sport chassis, but the finely crafted cabin, top-class refinement and agile handling make up for these flaws. It’s also cheap to run and holds its value well.

2ndCitroen DS3 e-HDi DSport ★★★★ The Citroen DS3 finishes second, but only by the narrowest of margins. It’s great to drive, attractively styled and surprisingly practical. However, it’s held back by a high price, poor residuals and the fact that it can’t match the A1’s first-rate fit and finish inside.

3rdAlfa MiTO 1.3 JTDm Sprint ★★★ While the Audi and Citroen fought a close scrap for victory, the Alfa was never in the hunt. It looks great and is cheap to buy and run, but the MiTo is too rough around the edges to succeed against such tough rivals. More work needs to be done before it troubles the class leaders.