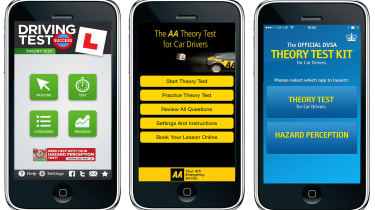 Adding more performance, as well as a six-speed gearbox, makes the Alfa Romeo MiTo TwinAir Sportiva a more useable car outside of town, though it still lacks some of the refinement that its more keenly-priced rivals offer. Buyers will now get higher levels of specification, though despite a minor update, it's still showing its age both inside and out.

Alfa Romeo is getting back on track, and helping matters is an updated MiTo range that features four new trim levels: Sprint, Distinctive, Sportiva and the range-topping Quadrifoglio Verde (QV). The Alfa Romeo MiTo Sportiva, at £16,300, offers the best sense of value of the four trim levels, featuring the 18-inch alloy wheels, steering wheel and leather-trimmed handbrake from the sporty QV model.

The 2014 updates made by Alfa Romeo to the MiTo are best described as 'subtle'. The Alfa Romeo front grille now has a chrome finish, while the front and rear light clusters benefit from a titanium grey finish. At the back, a sportier bumper improves appearances and the rear windows now feature privacy glass.

It's inside that Alfa Romeo’s changes are more apparent, with the MiTo sporting new dashboard design and layout that houses a five-inch touchscreen infotainment system. Sadly, the hardware itself already looks somewhat dated. Nonetheless, the look and feel of the materials used throughout by Alfa Romeo are noticeably better - if not class-leading – than the previous generation car. 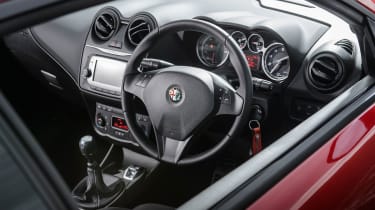 However, Alfa Romeo’s extensive use of darker colours means that it feels less spacious than it really is. As ever, the MiTo's long doors make for comfortable ingress and egress but prove inconvenient in tighter car parks.

Alfa Romeo has tuned the 875cc TwinAir engine that it shares with the Fiat 500 to produce 104bhp. The updated engine gives the MiTo more spring in its step around town, but more importantly, the addition of an extra ratio in the gearbox means the car is now that bit more refined at higher speeds, especially on motorways.

Despite its additional power, the Alfa Romeo MiTo still retains its tax-friendly 99g/km of CO2 output. Being a two-cylinder engine, the MiTo has quite a distinctive sound that will be somewhat divisive - in many ways, it adds to the little Alfa Romeo’s charisma, but some won't like it. However, it does have a tendency to encourage faster driving, which can be detrimental to economy. Selectable driving modes are chosen via the centrally-mounted 'DNA' switch as before.

The MiTo’s ride comfort suffers slightly from the addition of the 18-inch wheels on the Sportiva specification, leading to a busy drive over uneven road surfaces even at low speeds. This exaggerates the impression that constant steering adjustments are required.

Overall, the Alfa Romeo MiTo remains a car that will be a choice for those that want to stand out from the crowd, and are willing to put up with some of its shortcomings.

Read more about the best superminis currently on sale in the UK.