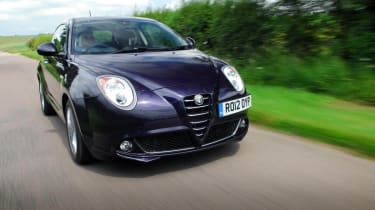 The MiTo TwinAir takes one of the most charming, enjoyable engines in the world and wraps it in a sophisticated, quality design. Sure, the same engine can be had in the Fiat 500 for less, but the Alfa is loaded with features and is great to drive – so much so that you can forgive some of the MiTo’s other shortcomings. It’s easily the pick of the range.

Alfa Romeo has fitted the revolutionary TwinAir engine into its elegantly styled MiTo supermini. The change means CO2 emissions dip under the 100g/km barrier – but are two cylinders enough for a car of this size?

The 875cc turbo two-cylinder is used in the Fiat 500, Panda and Punto, plus the Chrysler Ypsilon, and has won numerous accolades – deservedly so. It features some clever technology to deliver excellent low-down torque, peaking at 145Nm at a mere 2,000rpm, with power of 84bhp at 5,500rpm. This doesn’t sound like much, but what the MiTo lacks in outright performance it makes up for in character. In a word, the TwinAir is fun.

It makes far better progress than the woeful performance figures suggest (0-62mph in 12.5 seconds), so long as the DNA switch is set to Dynamic, which sharpens throttle response and allows the engine to produce its peak torque from 1,500rpm.

Alfa’s TwinAir comes with a six-speed manual box and, if you want to keep the engine on the boil, it must be kept in its sweet spot between 1,800-5,000rpm. There’s no automatic option, but the manual is such a pleasure to use that’s not a problem – and all the time you’ll be entertained by the seductive warble of that twin-cylinder engine.

This is a car that loves to be driven flat-out at every opportunity, and thanks to the quick steering, the tiniest movement on the wheel fires it round bends like a mini hot hatch. It’s not long before you find yourself having a ball.

The car’s closest rival is probably the 500 TwinAir, but although they share the same engine the Fiat is a fair bit cheaper, with prices starting from £11,660. This is balanced out by the MiTo’s superior quality and the longer wheelbase, which gives a slightly better ride on its 16-inch wheels. The optional 17-inch alloys see the ride deteriorate quite badly.

The MiTo TwinAir proves the old adage that it’s more fun to drive a slow car fast than it is to drive a fast car slow. Combine that with cute looks which can be endlessly personalised, and Alfa should have a hit on its hands with this pert little bundle of fun.