Hot hatchback Alfa Romeo MiTo Cloverleaf is fast in a straight line, but a Citroen DS3 will run rings around it in corners 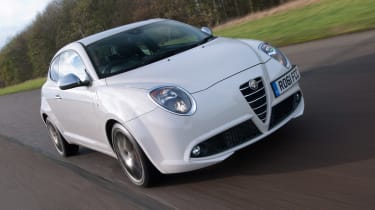 Flagship Alfa Romeo MiTo hot hatch comes with an illustrious name from Alfa’s past – Quadrifoglio Verde is Italian for Green Cloverleaf. Under the bonnet is a 170bhp 1.4-litre turbo petrol engine that’s mated to a six-speed manual gearbox and uses Alfa’s clever Q2 differential to get its power to the road. This combination makes for an entertaining package, although the engine’s straight-line performance is the highlight. But the MiTo’s biggest problem is its price – it’s one of the most expensive supermini hot hatches around. It costs about the same as a MINI Cooper S or Renaultsport Clio 200, while the more entertaining Citroen DS3 powered by the 1.6-litre turbo is around £2,000 cheaper.

The highlight of the MiTo Quadrifoglio Verde is its engine. The 170bhp 1.4-litre turbo petrol is keen to rev and sounds great, and the MiTo accelerates from 0-62mph in 7.5 seconds and on to a top speed of 136mph. That’s competitive with rivals such as the Citroen DS3 1.6 THP (0-62mph in 7.3 seconds) and MINI Cooper S (7.0 seconds). In corners, the MiTo has to give second best, as it’s not quite as responsive as its rivals.

The 1.4-litre turbo engine comes with stop-start as standard, which helps the MiTo Quadrifoglio Verde return 47.1mpg and emissions of 139g/km. This is far better than rivals such as the MINI Cooper S (190g/km) and Citroen DS3 (155g/km). The biggest stumbling block is the MiTo’s price. It’s slightly more than a standard Cooper S, although it comes with far more standard kit, and a huge £2,000 more than the Citroen DS3 1.6 THP DSport.

The Alfa MiTo has distinctive looks, and these are enhanced on the Quadrifoglio Verde version with 17-inch alloy wheels (or optional 18-inch wheels), satin silver trim for the lights, wing mirrors and doorhandles, twin exhaust pipes, plus special white Cloverleaf badges on the front wings. Inside, aluminium pedals and a leather steering wheel are added, but apart from that there’s not much extra over a standard MiTo.

The MiTo is only offered as a three-door, but then all of its rivals are the same. There’s a 270–litre boot, a MINI Cooper S only has 160 litres with the seats up, but the Citroen DS3 has 285 litre boot. Rear space in the MiTo is a little cramped, while the small rear windows add to the claustrophobic feel. Comfort up front is compromised by the hard seats.

The MiTo has a five-star Euro NCAP safety rating, and comes with a full complement of airbags, plus traction and electronic stability control plus brake force distribution. Alfa has made a concerted effort to improve the reliability of its cars, and there have been no major issues with the MiTo so far. However, Alfa dealers haven’t got the best reputation, as they consistently appear in the bottom half of Auto Express dealer surveys. 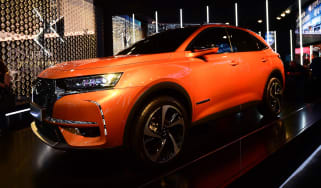